A Ku-Band version the Ku-8200 is also available, and has been designed mainly for applications such as VoD, Interactive-TV, Program Rating and other broadcasting related applications sharing the same satellite as content broadcasting, or in areas where Ka-Band HTS satellites are not available. 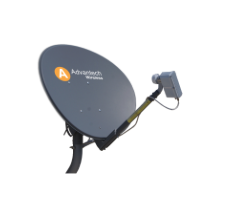 The new ultra-compact all-outdoor Ka-8200 VSAT transceiver-router from Advantech Wireless is specifically designed for M2M, SCADA and IoT over satellite, and can be combined with all other Advantech Wireless VSAT terminals within the same A-SAT-II system according to application requirements. The Ka-8200 has been designed for a wide variety of low data rate random access satellite applications such as:

Oscar Glottman, CMO Satellite Business Unit at Advantech Wireless stated, "Our new Ka-8200 and Ku-8200 Ultra-Compact All-Outdoor VSAT transceiver-router represents a breakthrough enabling M2M, SCADA and IoT over satellite for areas were other short-haul wireless communication means are unavailable.  Recent market reports forecast that Internet-of-Things (IoT) will overtake mobile phones by 2018 reaching 16 billion connected devices by the end of 2021, and we expect a large growth in satellite connectivity for such applications, complimenting 4G/LTE and 5G with IoT, M2M and SCADA deployments.”

Advantech Wireless will be at booth No. 1.F40 at IBC 2016, and to schedule a meeting please visit