[Satnews] Although the skies outside of the Gaylord National Resort and Convention Center at the National Harbor in Maryland may have been blue and sunny, a dark cloud seemed to hang over the Air Force Association’s 2015 Air & Space Conference and Technology Exhibition.

Now, with the potential for another government shutdown and sequestration on the horizon, the mood at this year’s conference felt heavy. The focus of many discussions was trained on the impact that reduced budgets were having on Air Force acquisitions, civilian and enlisted pilots and planning for the next fiscal year and beyond.

The budget uncertainty and potential for impending sequestration has a significant impact on the Air Force’s ability to plan and execute on new space and satellite initiatives. According to General John Hyten, the Commander of the Air Force Space Command, “It puts us at a lower funding level than we would be at otherwise… We have some significant space recommendations in the FY16 President’s budget—many of which are classified… we won’t be able to get started on those. All of that stuff just gets put on hold.”

Aside from delaying the start of projects and initiatives, the budget uncertainty also has the Air Force looking for more cost effective and efficient ways to acquire necessary products and services— including COMSATCOM services. During a media roundtable, General Hyten discussed the need to reevaluate how these solutions are acquired and paid for as a way to drive cost efficiencies and decrease spending.

According to General Hyten, “[The commercial satellite] Industry has a lot of new capabilities we can take advantage of. The question is, how do we acquire them? Do we buy that? Do we enter into long term leases? We’re working with OSD and with Congress right now to get somebody to put together that integrated approach to make sure we acquire [these services] in the most effective and efficient way possible to give our warfighters the bandwidth they need.” 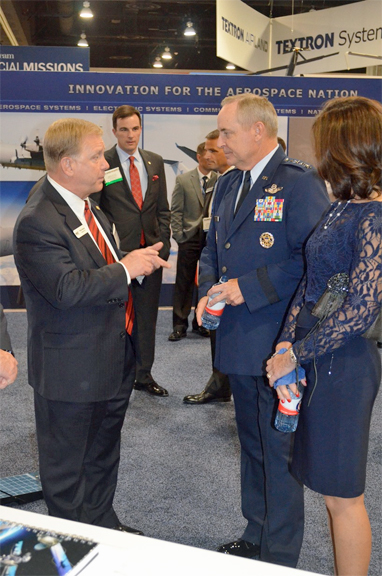 Photo is courtesy of GovSat.

The need to reevaluate the acquisition process for COMSATCOM solutions is one that we hear echoed frequently by private industry, military decision makers and even members of Congress—including Representative Jim Bridenstine and Representative Rob Wittman. Today, the military acquires these services in an ad-hoc, piecemeal fashion, as they are needed. This eliminates the ability to take advantage of efficiencies of scale by purchasing these solutions—collaboratively—in advance and in larger quantity. This also leaves the military susceptible to not having COMSATCOM capacity available, since satellite capacity is often sold on a, “First come, first served,” basis.

In addition to changing how these services are acquired, the Air Force is also exploring other commercial satellite offerings that could deliver the bandwidth necessary for missions at a much lower price. According to General Hawk Carlisle, “a lot of [information] passes over commercial comms systems. We pay for that out of our budget, and it’s not cheap. There’s other ways to do that. Inclined satellites are one of them. Hosted payloads is another one. There are a number of different ways. But we’re trying to make that less expensive.”

As discussed in previous posts on the GovSat Report, inclined satellites are older geostationary satellites that are near their end of life. To save fuel, they’re allowed to drift outside of their established area in a north/south direction. Capacity on these satellites is often significantly cheaper, and their utilization is much lower, making capacity readily available for government users.

Hosted payloads also enable cost savings and efficiencies, but in a much different way. Hosted payloads are payloads that the government can mount on a commercial satellite to essentially, “Hitch a ride,” to space. Although the payload is owned by the government, the satellite that it resides on is owned and operated by that COMSATCOM provider. This drastically reduces the cost to put a payload in space, since the cost of launch and operations is shared between multiple parties.

As General Hyten confirmed, COMSATCOM remains an essential part of delivering information and bandwidth to the tip of the spear. However, the budget environment is making all expenditures and programs—regardless of their importance to the mission and the warfighter—uncertain and difficult to finance. By working to change how the military acquires COMSATCOM solutions, embracing alternative—and less expensive—routes into space and adopting lower-priced COMSATCOM solutions, such as inclined satellites, the Air Force can ensure essential COMSATCOM services are available even if budget dollars aren’t.

This article is courtesy of The GovSat Report, which is sponsored by SES GS.