Sierra Nevada Corporation (SNC) reports they are one step closer to testing the VR35K-A, a commercialized version of the VORTEX engine system, a project that is under development in a combined effort with the Air Force Research Laboratory (AFRL). 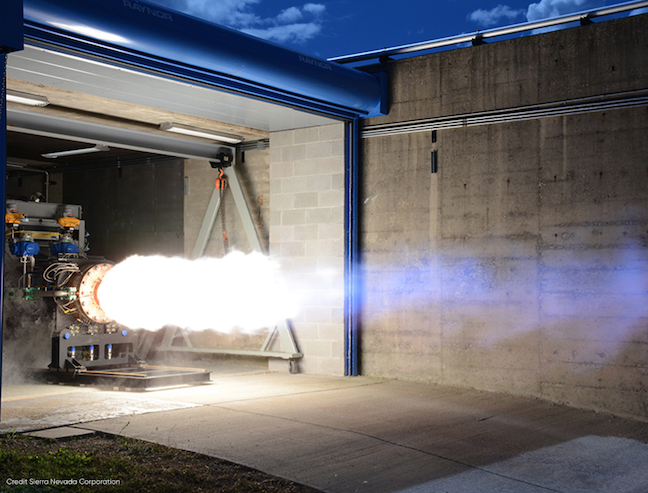 SNC’s owner and CEO, Fatih Ozmen stated that they are committed to using technology that is cutting-edge, but also cost-effective, and the VR35K-A is a great example of both.  This solution shows how small business technologies can be accelerated into valuable applications for commercial and military use. SNC partners with several other small businesses for components and key subsystems of the engines.

SNC is expanding on its legacy success with the VORTEX technology, using it as the baseline for the next-generation liquid oxygen and liquid hydrogen upper stage class engine.  State-of-the-art technology and a VORTEX flow field to cool the inner walls allows the new engine to be simpler, smaller and lower cost.

The overall size of the engine is also drastically smaller in comparison with traditional combustion upper stage engines, making it up to 50 percent cheaper.

Tom Crabb, vice president of SNC’s Propulsion and Environmental business unit added that AFRL has a history of developing and discovering new technology that can be applied in air and space and they are pleased to continue their commercialization effort with them.  SNC’s VORTEX technology is truly a unique new value to future launches and they are both excited and motivated to see this program move forward.