Watching the Watchers: The State of Space Surveillance 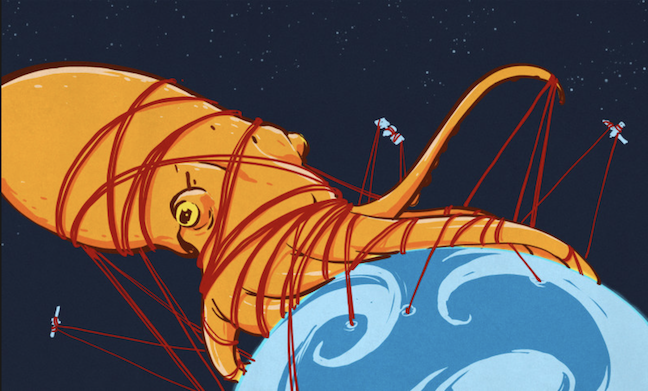 By now you’ve almost certainly heard about the recent release of a high-resolution satellite image showing the aftermath of Iran’s failed attempt to launch their Safir liquid fuel rocket. The geopolitical ramifications of Iran developing this type of ballistic missile technology is certainly a newsworthy story in its own right, but in this case, there’s been far more interest in how the picture was taken. Given known variables such as the time and date of the incident and the location of the launch pad, analysts have determined it was likely taken by a classified American KH-11 satellite.

The image is certainly striking, showing a level of detail that far exceeds what’s available through any of the space observation services we as civilians have access to. Estimated to have been taken from a distance of approximately 382 km, the image appears to have a resolution of at least ten centimeters per pixel. Given that the orbit of the satellite in question dips as low as 270 km on its closest approach to the Earth’s surface, it’s likely that the maximum resolution is even higher. 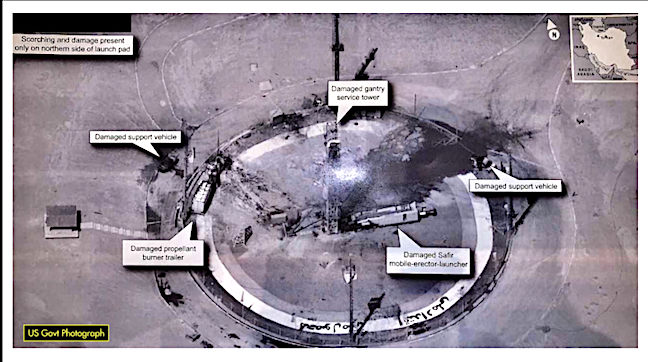 Of course, there are many aspects of the KH-11 satellites that remain highly classified, especially in regards to the latest hardware revisions. But their existence and general design has been common knowledge for decades. Images taken from earlier generation KH-11 satellites were leaked or otherwise released in the 1980s and 1990s, and while the Iranian image is certainly of a higher fidelity, this is not wholly surprising given the intervening decades.

What we know far less about are the orbital surveillance assets that supersede the KH-11. The satellite that took this image, known by its designation USA 224, has been in orbit since 2011. The National Reconnaissance Office (NRO) has launched a number of newer spacecraft since then, with several more slated to be lifted into orbit between now and 2021.

So let’s take a closer look at the KH-11 series of reconnaissance satellites, and compare that to what we can piece together about the next generation or orbital espionage technology that’s already circling overhead might be capable of. 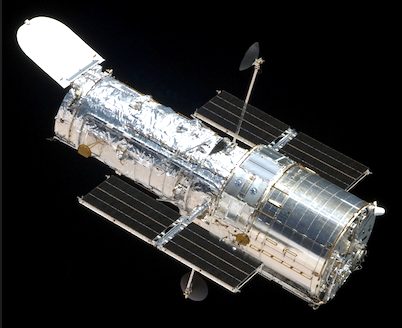 The KH-11 “KENNEN” satellite was designed as a replacement for the film-based KH-9 “HEXAGON” satellites developed in the 1960s. Recovering images from these older satellites required the use of small capsules that would re-enter the Earth’s atmosphere and get caught in mid-air by a waiting aircraft; a slow, complex, and expensive process. In comparison, the KH-11’s digital technology meant that images could be transmitted through a network of communications satellites in near-real time.

But despite the first KH-11 being launched all the way back in 1976, there has never been a publicly released image of one. Luckily, analysts have a fairly good idea what the satellites look like because they happen to have have a very famous cousin: the Hubble Space Telescope. Both space-going Cassegrain reflector telescopes were built by Lockheed, and according to official NASA records, some of the design elements of the Hubble (such as the 2.4 meter diameter of the main mirror) were selected to “lessen fabrication costs by using manufacturing technologies developed for military spy satellites”. 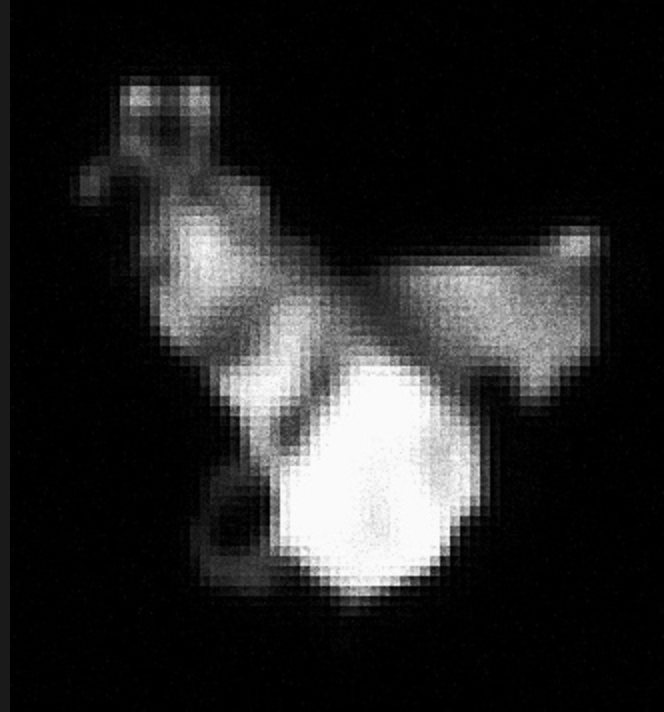 The family resemblance isn’t just speculation either. In 2010 and again in 2015, astrophotographer Ralf Vandebergh was able to directly image two separate KH-11 satellites using essentially hobbyist-grade equipment. Despite his relatively low tech approach, he was able to snap shots of these secretive spacecraft that appear to confirm suspicions that their design closely resembles the Hubble.

In the pixilated images, we can see the same tapered shape and what appears to be an aperture door at the end of the telescope. The KH-11 also features at least one solar “wing” like the Hubble, and potentially a directional antenna array of some type on the opposite side; though Ralf does say this could simply be a trick of the light.

In terms of size, the KH-11 is almost certainly the same diameter of the Hubble due to the shared mirror, but rumors suggest that it’s not as long. A shorter focal length would give the KH-11 a wider field of view than the Hubble, which would be better suited to observing the ground.

AS GOOD AS IT GETS 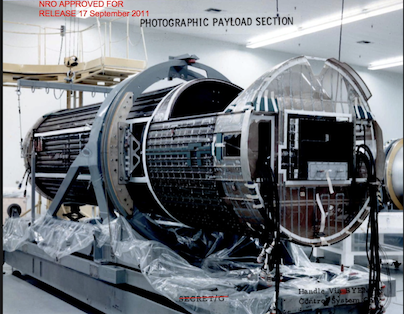 The KH-8 GAMBIT was capable of similar resolution

If one man with consumer equipment could identify, track, and photograph two KH-11 satellites, it stands to reason that the intelligence agencies of other countries have managed similar feats. The idea that any technologically advanced nation would be caught unawares by the presence of one of these satellites overhead seems unlikely at best.

Of course, knowing they’re up there isn’t the same as knowing what they can actually see. But as it turns out, that isn’t a difficult question to answer either. Calculating the angular resolution of a telescope can be done using the Rayleigh criterion, which takes into account the wavelength to be observed and the diameter of the lens’ aperture. That angular resolution, when combined with the altitude of the satellite at the time of observation, can tell us how large an object needs to be before an optical telescope like the KH-11 can actually see it from space.

With a 2.4 m mirror observing a nominal wavelength of 500 nm, the Rayleigh criterion tells us a telescope should have a diffraction-limited resolution of around 0.05 arcsec. At an altitude of 250 km, that translates to a surface resolution of approximately 6 cm (2.4 inches). Keep in mind this is a theoretical maximum, in practice the resolution will be less due to atmospheric instability and the fact the satellite is unlikely to be directly above the target. With an estimated resolution of 10 cm, the Iranian image is therefore well within the calculated performance envelope of the KH-11.

Again, it would not have been difficult for any potential adversary to run the numbers and realize what the KH-11 would be capable of seeing. Especially since the United States has been running surveillance satellites at this physical resolution limit for more than 50 years. The KH-8 “GAMBIT”, a film-based surveillance satellite first launched in 1966, was also capable of resolving objects at 5 to 10 cm under ideal conditions. 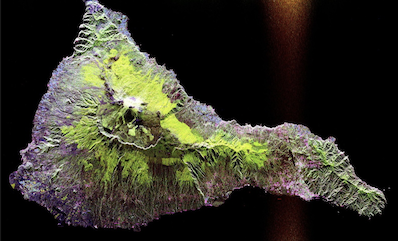 It might seem strange that a US surveillance satellite from 1966 would have comparable resolution to the ones flying around in 2019, especially with how much technology has changed since then. But ultimately, these are large optical telescopes, and the physics that govern their performance were figured out long before anyone ever dreamed of sending one of them to space. The rest of the spacecraft surrounding the telescope has certainly evolved since the 1960s, with improved propulsion, data throughput, energy consumption, and endurance; but a 2.4 m mirror is going to work the same today as it did 50 or even 100 years ago.

If the capabilities of optical telescopes have hit the physical limit, then where do we go from here? The most obvious way to wring more performance out of these satellites is through the use of image enhancement software. Thanks to the leaps and bounds computing performance has made over the last decade, the images from the telescope can be sharpened and cleaned up digitally. This is potentially why the Iranian image looks clearer than KH-11 shots released in the 1990s, even though the actual resolution of the telescope has not fundamentally changed.

Beyond that, it’s believed newer reconnaissance satellites, such as NROL-71 that was launched in January 2019, may augment or completely replace their optical telescopes with other sensing technologies such as synthetic-aperture radar (SAR). A radar imaging satellite has many advantages over an optical one, such as the ability to observe the target at night and in poor weather. In laboratory settings, SAR has achieved sub-millimeter resolution, and while the real-world accuracy would surely be lower when viewing the target from hundreds of kilometers away, it has the potential to move orbital surveillance beyond the physical limits that have been in place since the very first “spy satellites” took to the skies during the Cold War.