Launch! ULA's Delta IV Is On An NROL-25 As Spy Satellite Soars Skyward 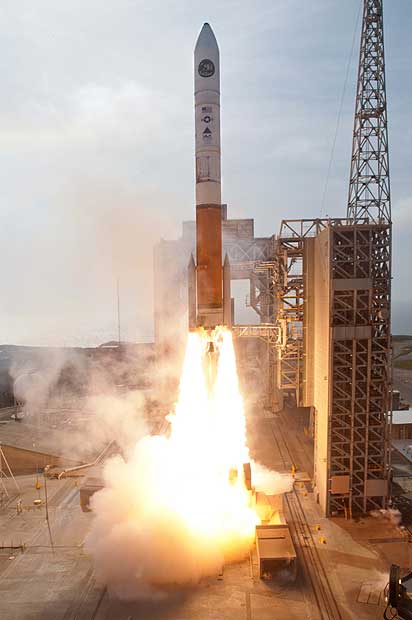 Vandenberg Air Force Base, Calif. (April 3, 2012) – A United Launch Alliance Delta IV rocket blasts off from Space Launch Complex-6 at 4:12 p.m. PDT with a national security payload for the National Reconnaissance Office. This is the 59th launch for ULA and represents the first of five National Security Space missions that will be launched by the EELV program over the next four months. Photo by Pat Corkery, United Launch Alliance

[SatNews] A Great Launch, Designated NROL-25, the mission is in support of national defense.

"Congratulations to the NRO and to all the mission partners involved in this critical national security launch,” said Jim Sponnick, ULA vice president, Mission Operations. “ULA is proud to have supported this mission and delivered critical capabilities to the men and women defending our freedom throughout the world.

NROL-25 represents the first of five National Security Space missions that will be launched by the EELV program over the next four months - including four NRO missions along with the upcoming AEHF-2 launch.

Developed by the United States Air Force to assure access to space for Department of Defense and other government payloads, the EELV Program supports the full range of government mission requirements, while delivering on schedule and providing significant cost savings over the heritage launch systems.

The United Launch Alliance Delta 4 rocket will launch a classified payload for the National Reconnaissance Office, the U.S. government agency that develops and owns spy satellites. The rocket will fly in the Medium+ (5,2) configuration with two solid rocket boosters.

The launch will be the first of four that the NRO has planned this year, a batch of missions that also includes an Atlas 5 on June 20 and a Delta 4-Heavy on June 28, both from Cape Canaveral, and another Atlas 5 from Vandenberg on August 2.