Thales Alenia Space company info
[SatNews] The first four Globalstar Second Generation satellites have been successfully positioned in their operational orbit, marking the start of service for this new constellation. 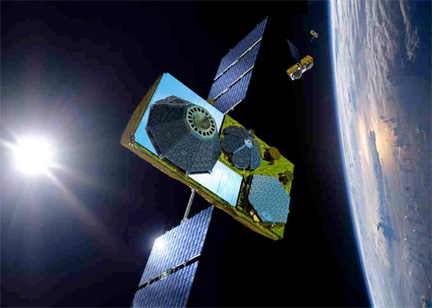 Artistic rendition of Globalstar's 2G satellite
After the launch by Arianespace and Starsem using a Soyuz rocket from Baikonur on October 19, 2010, Thales Alenia Space teams took charge of orbital positioning operations, at the Globalstar control center in Milpitas, California. The Globalstar-2 constellation is comprised of 2G low Earth orbit (LEO) satellites that will provide mobile phone and data services. To ensure global coverage, the satellites will be equally distributed in eight orbital planes, inclined 52 degrees and separated by 45 degrees. For this type of orbital arrangement, optimized orbital positioning maneuvers are used in conjunction with the natural drift from the injection plane to the operational orbital positions, to use as little of the satellites’ own fuel as possible. These maneuvers are in fact long and complex because the new satellites have to be moved to the different orbital planes making up the constellation.

The launcher initially injects the satellites into orbit at an altitude of 920 km. The first satellite reached its operational position in mid-November in plane C at an altitude of 1,414 km, while the three following satellites recently reached their positions in plane B. All four of these satellites have now passed acceptance tests, with both payload and platform showing very satisfactory performance. Furthermore, the quality of the initial calls transmitted by these satellites is excellent. The last two satellites in the first cluster of six to be launched are still in transition orbit at 1,000 km, with an initial orbit-raising maneuver being carried out in December. The new constellation will help ensure service continuity for Globalstar until 2025, as well as providing a platform for an expanded service offering, based on innovative solutions. Each 2G Globalstar satellite weighs about 650 kg at launch, and offers end-of-life power of 1.6 kW and a design life of 15 years. Each satellite has 16 uplink channels (L- and C-band) and 16 downlink channels (C- and S-band).