At a time when unfettered access and freedom to operate in space is of vital interest to the United States, The Aerospace Corporation (Aerospace) convened a forum on February 12 with 160 leaders who represented the military and industry from 19 organizations to discuss actions that can keep U.S. national security space assets secure. 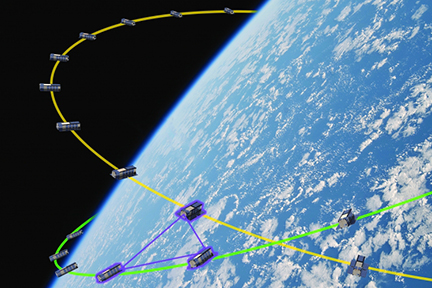 In this threat environment, the 2018 National Defense Strategy challenged the Department of Defense to “deliver performance at the speed of relevance.” Key topics discussed included how to transform the national security space enterprise into an architecture that continuously outpaces the adversary threat. They also focused on methods to streamline military acquisitions and accelerate innovation.

“We must change our acquisition approach to stay ahead of our adversaries in space and to provide more capability for all our warfighters,” said Lt. Gen. John “JT” Thompson, commander of the U.S. Air Force Space and Missile Systems Center (SMC). “Through continued engagements like this, we can solve these problems together, and address the threats to our nation’s space enterprise.”

Building in flexibility — both in acquisition processes and product architecture — underpinned much of the discussion at the event. There was a focus among industry experts on novel ways to increase the pace of delivery with enhanced innovations and cost efficiency. An increased launch rate would also mean more opportunities for technology insertion, meaning that the technology on satellites could be refreshed with each launch.

The discussion, hosted at Aerospace’s El Segundo headquarters, was the first of several in a series of events that Aerospace will hold on this topic.  The company will host a similar event in the Washington, D.C., area for members of the industry on February 21 and additional events are planned in the near-term.

At the conclusion of the forum, Colonel Dennis Bythewood, SMC Development Corps lead, announced the imminent release of a Request for Information (RFI) for a “combat” bus that meets military requirements. “We need industry partnerships to help define key interfaces together,” said Bythewood.

RFI input from industry will help inform a new spacecraft bus acquisition approach that can support a number of different modular payloads such as GPS, strategic communications, and missile warning sensors.

Aerospace President and CEO Steve Isakowitz said that as a federally funded research and development center dedicated to U.S. leadership in space, Aerospace has a unique role in convening the best minds from industry to keep ahead of the threats that are mounting in spac. It is vital that the space industry comes together to share the firm's thinking in how to accelerate space capability.