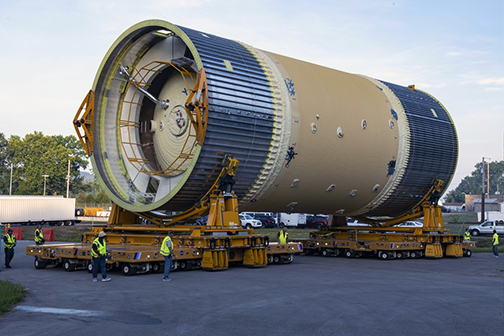 The fourth and final structural test article for NASA’s Space Launch System (SLS) core stage was unloaded from NASA’s barge Pegasus at NASA’s Marshall Space Flight Center in Huntsville, Alabama, Tuesday, July 9, 2019. The nearly 70-foot-long liquid oxygen (LOX) tank structural test article was manufactured at NASA’s Michoud Assembly Facility in New Orleans and is structurally identical to the flight version. Next, crews will load it into a test stand at Marshall for critical testing. The liquid oxygen tank is one of two propellant tanks in the rocket’s core stage that will produce more than 2 million pounds of thrust to help launch Artemis 1, the first flight of NASA’s Orion spacecraft and SLS, to the Moon.

Photo is courtesy of NASA/Fred Deaton.

SLS, the agency’s first rocket built to send humans to deep space since the Saturn V, will have the power to take astronauts forward to the Moon and ultimately to Mars. Testing the new, increasingly complex pieces of hardware for the first flight of SLS and NASA’s Orion spacecraft is critical to the success not only of the first mission but to future missions, especially for the core stage that is used on all configurations of the rocket.

Marshall has tested major components of the core stage, upper stage and payload structures for SLS to determine they will be able to withstand the forces and conditions they will ultimately face during launch and flight. To date, Marshall test engineers have completed testing on the whole upper part of the rocket, which includes the interim cryogenic propulsion stage that will give Orion the final boost to the Moon, and two of the four core stage pieces being tested: the engine section that connects to the four RS-25 engines and the intertank, the piece of the core stage that feels the most force during launch and solid rocket booster separation.

The Marshall team completed testing on the intertank in June, which included tests to see just how much force the intertank could stand, and then began testing the liquid hydrogen tank test article. During testing, dozens of hydraulic cylinders at Marshall’s Test Stand 4693 push and pull on the giant tank to mimic the same stresses and forces it will endure during liftoff and flight.

Engineers are preparing the last structural test article, the liquid oxygen tank, to begin testing to start this fall. All test articles, including the liquid hydrogen and the liquid oxygen tanks, are structurally identical to their flight versions. The liquid hydrogen tank test article is bolted to a huge 80,000-pound steel ring on the test stand, where it is suspended within the test stand with the loads applied at the base. Thirty-eight hydraulic cylinders are then calibrated and positioned all along the tank to apply millions of pounds of crippling force from all sides, and engineers measure and record the effects of the launch and flight forces. Meanwhile, the test article is filled with cryogenic fluid to simulate fuel and propellants used during flight.

The rocket’s massive core stage is made up of five major components: the engine section, liquid hydrogen tank, intertank, liquid oxygen tank and the forward skirt. Together, these five parts make up the “core” of the rocket, and all the qualification testing will verify the components of the core stage are ready for Artemis 1.

The Space Launch System is the most powerful rocket ever built by NASA and is designed to safely send humans to the Moon — to stay — so that a new era of deep space exploration is possible. Testing ensures the success, not only of the initial flights, but also those SLS flights that will carry American astronauts to the Moon and ultimately to Mars.

SLS program manager John Honeycutt said this is a historic moment for the Marshall team as well as a significant milestone for the Artemis program and are now more than halfway through the largest test campaign at Marshall since articles from NASA’s Space Shuttle Program were tested here. With the delivery of the liquid hydrogen tank test article, the final stage of Space Launch System structural testing is now being entered.

Matthew Cash, lead structural test engineer for the intertank and liquid oxygen tank structural testing added that the Marshall team is able to see firsthand how unique each of the different core stage components are from one another. More than 11 million pounds of force was applied to the intertank. That’s the most of any SLS test element.

Mike Nichols, the test conductor for the liquid hydrogen tank tests, noted that it will take about four months to complete each of the test scenario. Engineers carefully monitor the testing and data from stations several miles away, noting how the tank responds to the varying pressures and mechanical loading through a series of sensors attached to the tank.