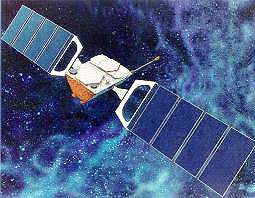 Artistic rendition of a Globalstar satellite
Link to Company homepage
[SatNews] Come July, this second set of satellites is scheduled to enrich the Company's growing constellation... 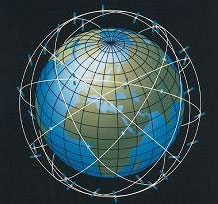 Globalstar signed a contract with Thales Alenia Space in late 2006 for the design, manufacture and delivery of its second-generation constellation satellites. In 2007, Globalstar contracted with Arianespace for a total of four launches of six satellites each using the reliable human-rated Soyuz, which is also used to launch astronauts and cosmonauts to the International Space Station. Globalstar plans to integrate the 24 new 2G satellites with the eight 1G satellites that were launched in 2007. The new satellites are designed to support Globalstar's current lineup of voice, Duplex and Simplex data products and services including the Company's lineup of SPOT retail consumer products.