To better serve maritime customers in their need to affordably bring entertainment and operations content onboard ships at sea, KVH developed the IP-MobileCast content delivery service. This service utilizes multicasting technology to broadcast large files to all ships at once, an efficient and cost-effective delivery method that stands in stark contrast to most competitors’ current practice of unicasting files individually to each vessel and charging them for the satellite service consumed. With IP-MobileCast, customers pay a monthly subscription fee for entertainment and news content, new-release Hollywood movies and TV shows, for example, but do not pay a data transmission fee.[SatNews] The mini-VSAT Broadband service of KVH Industries, Inc., (Nasdaq: KVHI) has been cited in a newly published report as the market share leader in the maritime VSAT industry by vessels in service. “The COMSYS Maritime VSAT Report, 4th Edition” estimates that KVH’s mini-VSAT Broadband customers account for 17.9 percent of the vessels using maritime VSAT service, as of the end of 2014. According to COMSYS, KVH’s market share is nearly double the nearest competitor, whose customers account for an estimated 9.6 percent of vessels using VSAT service. 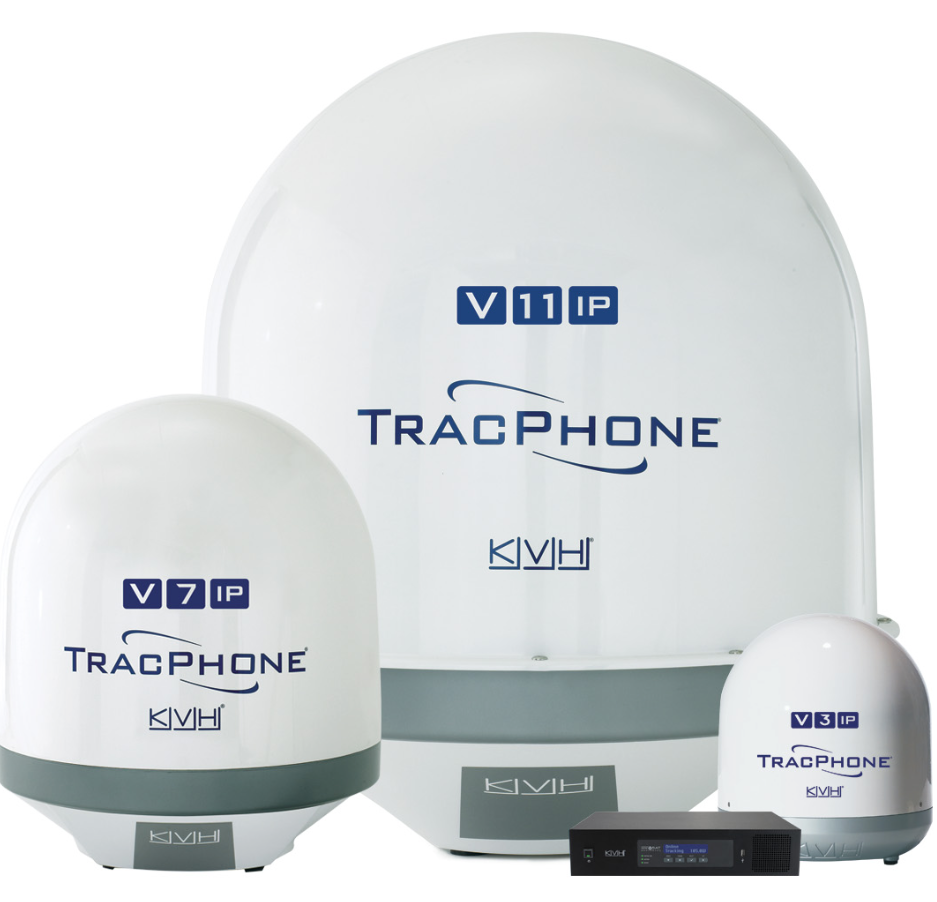 The rugged, gyro-stabilized TracPhone V-IP antenna systems are designed by KVH for the mini-VSAT Broadband network.

KVH launched the mini-VSAT Broadband service in 2007 and designed it from the ground up to be a next-generation maritime satellite communications solution, utilizing advanced spread spectrum technology that enables KVH’s TracPhone V-IP antenna systems to be 85 percent smaller than competing maritime VSAT products, thereby reducing the installation time and cost for maritime customers. The mini-VSAT Broadband service provides fully global coverage from 24 satellite transponders; is very fast, providing Internet downloads as fast as 4 Mbps; and has low latency, making it ideal for new applications being adopted by leading ship management companies.

“KVH’s success in building the largest installed base of vessels over little more than six years from a standing start illustrates how powerful the combination of a smaller antenna, easier installation and better onboard integration can be,” reports Simon Bull, the well-respected VSAT industry analyst at COMSYS, the U.K.-based research firm specializing in the satellite communications market. “The past two years have seen the company introduce a range of attractive value-added services and invest heavily in content and integration in an impressive strategy to establish itself as much more than just a bandwidth reseller.”

“It is great to see one of the most highly regarded research reports in the satellite communications industry quantify KVH’s success in winning the maritime VSAT market leadership position,” says Martin Kits van Heyningen, KVH chief executive officer. “We’ve listened carefully to our customers and tried to continually improve our service to provide them with the connectivity and content services they need to add value for their customers, enhance their efficiency, and keep their crews happy. Our strategy is clearly paying off, as 2014 was a record-breaking year for the company, during which our global mini-VSAT Broadband network delivered more than 500 terabytes of data and 25 million minutes of voice calls to our customers around the world.”

KVH is also collaborating with leading maritime navigation and weather content providers such as Jeppesen, Transas, and AWT to deliver electronic charts and high-resolution weather data via the IP-MobileCast content delivery service. Aware of the importance of seafarer safety and professional qualifications, KVH also plans to provide multicasting delivery of maritime training content from Videotel, a leader in maritime training and a company that KVH acquired in July 2014.

COMSYS notes strong overall growth in the maritime VSAT market, estimating close to 21,000 vessels were equipped with maritime VSAT as of the end of 2014. It attributes this growth to changing attitudes within shipping companies about the return on investment of satellite connectivity, and to the realization that improved communications and Internet access for crews can save them money.

“VSAT communications seems to have moved from being a cost centre to a cost saver and a service that will actually be key to helping the commercial maritime operators recover from the disastrous economic situation that has been experienced since 2009,” Mr. Bull reports.  “It is all too easy to dismiss crew welfare as being something ‘nice to have’ and therefore a cost that can be easily dodged, but the fact is that recruitment and training cost money and increasingly these expenses are becoming significant. Many shipping companies experience annual staff turnovers in excess of 35 percent and, in one of our interviews with a major operator, a shipping company which had finally installed VSAT discovered that their retention rate had skyrocketed to 85 percent, easily justifying the additional cost of a VSAT service.”

He adds: “Surpassing the 20,000 mark is considered to be a tipping point for the industry with the target now probably around 50,000 vessels over the next few years. Not only do we see vessel growth across the major segments, but bandwidth demand also continues to rise.”

The comprehensive COMSYS report includes a total competitive review of all leading maritime VSAT companies, antenna and modem manufacturers, and satellite owners, plus detailed market analysis and customer information based on direct interviews.