Eighteen days after the Deepwater Horizon accident, an oil slick lingered in the Gulf of Mexico, off the coasts of Louisiana, Mississippi, and Alabama. 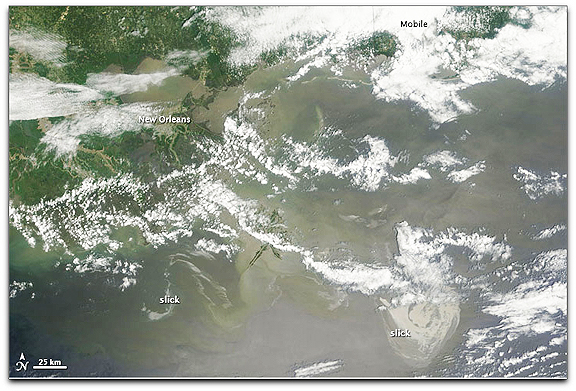 The Moderate Resolution Imaging Spectroradiometer (MODIS) on NASA’s Terra satellite captured this natural-color image on May 8, 2010. Although partially obscured by clouds, oil is discernible in two areas — a serpentine slick near the Mississippi Delta, and a large round slick south of the Mississippi-Alabama border. Oil on the water is visible in this image thanks to sunglint (sunlight reflecting off the ocean’s surface into the satellite sensor). 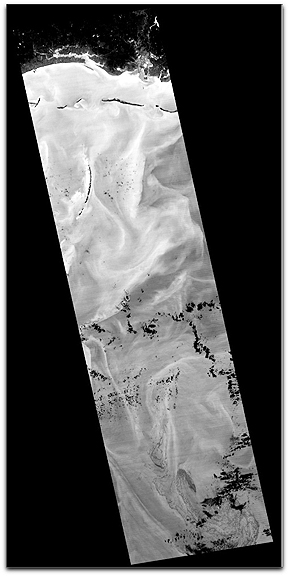 Image Credit: NASA/GSFC/METI/ERSDAC/JAROS, and U.S./Japan ASTER Science Team
Additionally, the Advanced Spaceborne Thermal Emission and Reflection Radiometer (ASTER) instrument on NASA's Terra spacecraft captured this nighttime image of the growing oil spill in the Gulf of Mexico on May 7, 2010.

This thermal image from ASTER covers an area measuring 60 by 240 kilometers (37 by 147 miles), most of it over the Gulf of Mexico. The coldest surfaces appear dark, and the warmest appear white. The city of Pascagoula, Mississippi, is visible in the upper right corner; at night the land is colder (darker) than the Gulf waters. Offshore islands below Pascagoula also appear dark compared to the surrounding ocean. The black dots and patches over the Gulf waters are small clouds, particularly in the southern half of the image. The thickest parts of the oil spill appear as dark grey, filamentous masses in the southern part of the image, extending off the bottom. Other dark-light swirl patterns are water currents where different temperature water masses are visible.