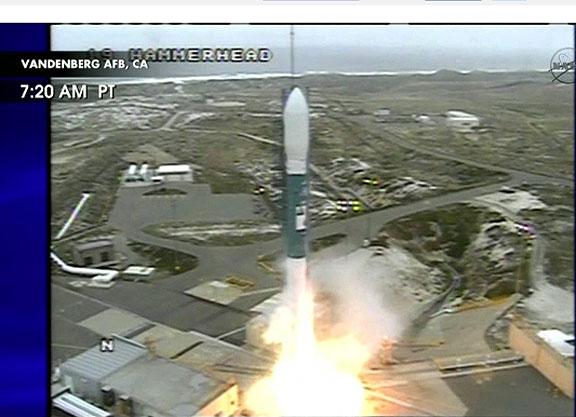 The launch of the Aquarius/SAC-D atop a Delta 2 rocket from VAFB
[SatNews] An international satellite arrived in orbit early today...

Carried aboard a Delta 2 rocket that blasted off from Vandenberg Air Force Base, the Aquarius/SAC-D satellite made its way to orbit. The United Launch Alliance rocket blasted off at 7:20 a.m. from Space Launch Complex-2, quickly disappearing into the thick marine layer blanketing Central Coast skies. The successful release of the spacecraft arrived after a smooth countdown.

“Team Vandenberg performed brilliantly once again in ensuring safe and successful launch operations,” said Col. Richard Boltz, 30th Space Wing commander, who also gave the final OK for the launch to proceed. “We wish our mission partners at NASA well as they begin their important work with Aquarius.”

The Aquarius/SAC-D satellite separated from the rocket about an hour after the launch, officials said. Aquarius/SAC-D is an international mission involving NASA and Argentina’s space agency. Brazil, Canada, Italy and France also participated in the mission. One of eight instruments on board the satellite, Aquarius will study ocean salinity or the concentration of salt on the ocean’s surface. (Sources: Santa Maria Times + NASA.)

NASA's Aquarius instrument is part of the SAC-D spacecraft built by CONAE, Argentina's space agency. The mission is expected to gather global measurements of ocean surface salinity, leading to a better understanding of ocean circulation, climate and Earth's water cycle. Once in orbit, the spacecraft will go through a checkout period before it starts its three-year mission. 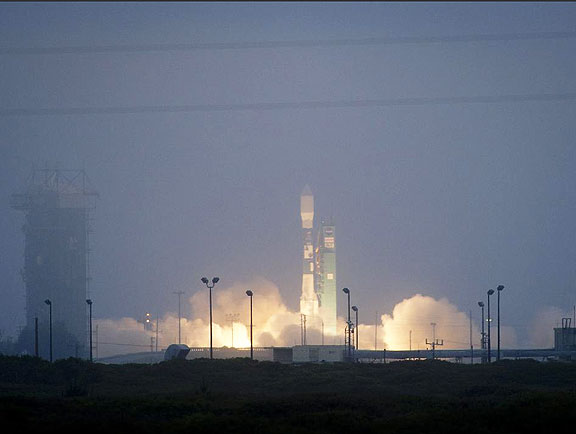