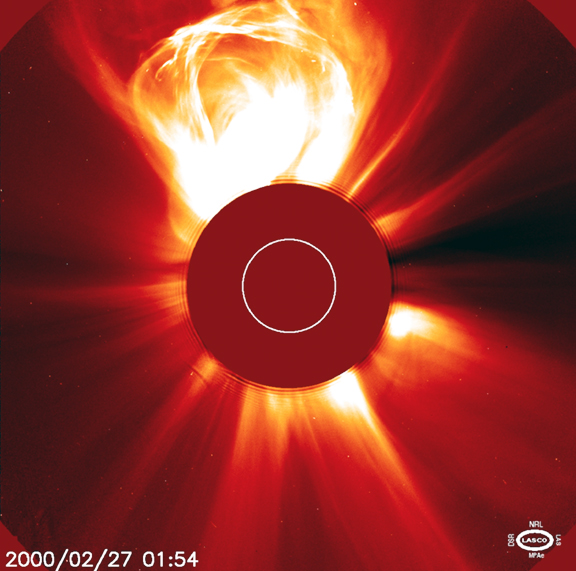 NASA has selected two proposals to demonstrate technologies to improve science observations in deep space. The proposals could help NASA develop better models to predict space weather events that can affect astronauts and spacecraft, such as coronal mass ejections (CMEs).

In this image, taken by the Solar and Heliospheric Observatory on Feb. 27, 2000, a CME is seen erupting from the Sun, which is hidden by the disk in the middle, so the fainter material around it can be seen.

Image is courtesy of ESA/NASA/SOHO.

Both proposals, funded at $400,000 for nine month mission concept studies, were selected based on potential technology and science value and the feasibility of development plans. They support NASA’s heliophysics program, which seeks to better understand the nature of space throughout the solar system and how it changes in response to the constant outpouring of energy and particles from the Sun and how it interacts with planetary atmospheres.

At the conclusion of the nine-month study period, one proposal will be selected to launch as a secondary payload with NASA’s Interstellar Mapping and Acceleration Probe (IMAP) spacecraft in October 2024. Taking advantage of NASA’s cost-saving rideshare initiative, it will be accompanied by two other science missions — a NASA science mission of opportunity and a National Oceanic and Atmospheric Administration (NOAA) space weather forecasting mission.

Peg Luce, Deputy Director of the Heliophysics Division at NASA Headquarters, said this is the first time that NASA's heliophysics program has funded this kind of technology demonstration. Providing the opportunity to mature and test technologies in deep space is a crucial step towards incorporating new techniques into future missions.

Thomas Zurbuchen, Associate Administrator for NASA’s Science Mission Directorate, added that by focusing on smallsats and capitalizing on the cost savings of sharing a launch, NASA can test and advance cutting-edge technologies at a reasonable price. The agency is leading the charge in using this innovative solution to test new mission paradigms and technologies.

The proposals for the technology demonstrations are:

Science-Enabling Technologies for Heliophysics (SETH)
SETH would demonstrate two technologies. The first is an optical communications technology for small satellites and CubeSats that is less complex than current systems and could enable a hundredfold increase in deep space data rates, while reducing the burden on NASA’s Deep Space Network. Such technology could help support future small satellite constellations that require high data rate communications systems.

The second technology demonstration aboard SETH detects solar energetic neutral atoms – fast-moving atoms flowing from the Sun that do not have a charge – as well as an array of waves and other particles that erupt from our Sun. Called the HELio Energetic Neutral Atom (HELENA) detector, the instrument provides observations that could enable advanced warnings of potential space radiation threats to astronauts.

Solar Cruiser
The Solar Cruiser investigation also demonstrates two technologies. A nearly 18,000-square-foot solar sail would demonstrate the ability to use solar radiation as a propulsion system. Such a system could provide views of the Sun not easily accessible with current technology.

The coronagraph instrument would enable simultaneous measurements of the Sun’s magnetic field structure and velocity of coronal mass ejections, or CMEs. These giant explosions of solar material are ejected into space and can set off space weather storms that, at their worst, interfere with utility grids on Earth. Improving data-gathering technology in this area is particularly useful for advance warning systems for at-risk infrastructure on Earth.

All funding for these missions comes from the Heliophysics Solar Terrestrial Probes program, which is managed by NASA's Goddard Space Flight Center in Greenbelt, Maryland.