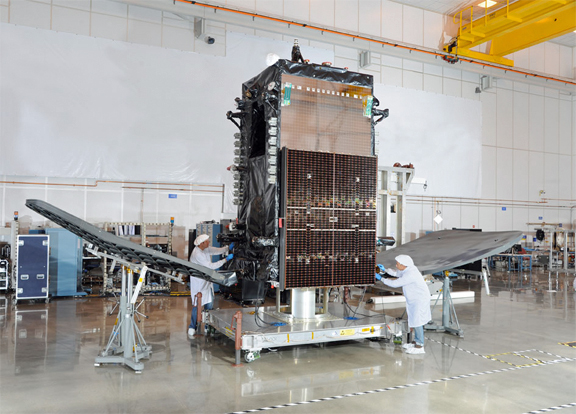 Photo of the SKY MEXICO-1 (SKYM-1) satellite during the build process,
courtesy of Orbital ATK.

The SKYM-1 satellite, due to launch in late May, will provide DTH television broadcast services to Mexico, Central America and the Caribbean for DIRECTV. The company produced the satellite at its Dulles, Virginia, manufacturing facility in just 20 months, four months ahead of the original baseline schedule. The SKYM-1 satellite, which is based on the flight-proven GEOStar-2™ platform, will now undergo pre-launch preparations for a late May launch aboard an Ariane 5 rocket.

Chris Richmond, Vice President and General Manager of Orbital ATK’s commercial satellite division, said, “SKYM-1 is our first satellite built for DIRECTV and represents what we hope will be the start of a longstanding, successful relationship.”

"Orbital ATK's execution on this program has been phenomenal," said Phil Goswitz, Senior Vice President of Space and Communications for DIRECTV. "Its program team worked with DIRECTV to successfully manage several technical hurdles and delivered four months ahead of schedule. Orbital ATK exceeded its commitment to us, and that's what everyone is looking for in this industry."