Maxar (the builder of the Houston Mission Control Center) participated in the successful Project Apollo that first placed humans on the Moon back in the 1960s, and the company is currently involved in the  Artemis program to establish a sustainable human presence on the Moon — the following is a Maxar post that highlights the importance of space exploration for technology advancements here on Earth. 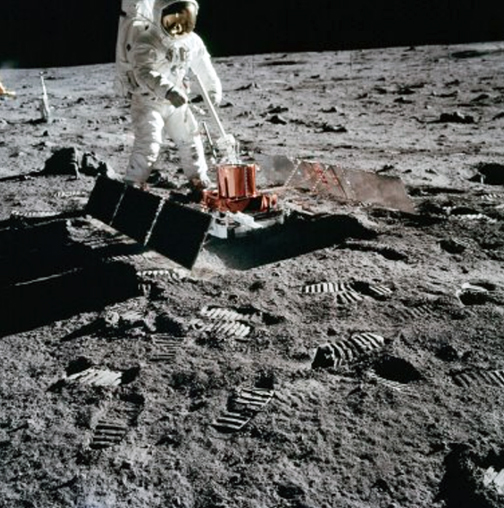 Buzz Aldrin pictured with the assembled seismic experiment on the Moon.

The 1960s was a turbulent and transitional time. The United States was immersed in the Vietnam and Cold Wars, coming to grips with civil rights inequities and reeling from assassinations of emerging leaders. Against that backdrop, the aerospace industry was rapidly advancing with early space launches, robotic exploration and manned spaceflight.

President John F. Kennedy’s famous edict to reach the Moon that decade was realized in an incredible fashion at the 11th hour. Maxar, then known as Philco-Ford, played a key role in that feat as the prime contractor for the Mission Control Center in Houston. Maxar and IBM also built the Apollo Lunar Surface Experiments Package, which astronaut Buzz Aldrin installed on the Moon to send seismic and environmental measurements back to Earth.

While the Apollo 11 Moon landing was a pivotal event for space exploration and source of national pride, it also turned out to be a unifying moment as TVs across the world tuned in to watch Neil Armstrong’s “first small step for man.” Some questioned the wisdom of spending 4 percent of the national budget on space exploration when the country had so many other needs, but NASA’s successes inspired a generation of students to enter science and engineering fields and spurred development in the microelectronics industry that would lead to decades of computer, network and software innovations.

Apollo-fueled technology — largely created in the United States — is the foundation for so many aspects of modern life. While Apollo was entirely funded by the U.S. government, the emergence of other national space programs and private space entrepreneurs has created an entirely new landscape for space exploration, enabling opportunities for the U.S. government to lean on the commercial sector and international partners to develop revolutionary capabilities for space and provide disruptive value.

However, the world still faces many critical challenges such as climate change and population growth. Addressing these vast issues will require technological breakthroughs, collaboration among nations and long-term focus and funding. NASA funding today is only 0.5 percent of the national budget, but spending on projects such as Mars robotics, Earth observation and future space exploration will engage students in STEM fields and catalyze new and disruptive technologies. 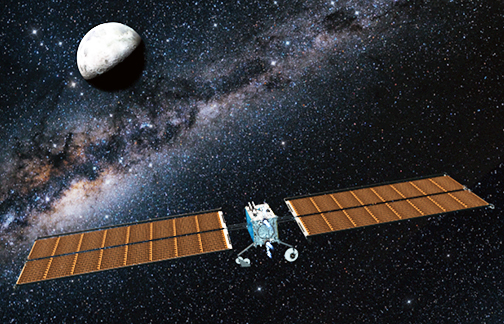 Artistic rendition of An artist’s impression of the Power and Propulsion Element spacecraft approaching the Moon.

Image is courtesy of Maxar.

That’s why NASA’s new Artemis program to send the first woman and the next man to the Moon in 2024 is so important. The Power and Propulsion Element spacecraft (seen to the left), awarded to Maxar in May, is the first element of the NASA-led Gateway — a multi-national lunar orbiting command module that will sustainably support human missions to the surface of the Moon for the Artemis program and enable future crewed missions to Mars.

Sustainability, never the intent of Apollo, relies upon key concepts such as reusability, recycling, repurposing and the use of available local resources. Compared to missions in LEO (around 400 km. from Earth), sustainably exploring the Moon (400,000 km. from Earth) and Mars (100 million km. from Earth) will require new technologies and innovations for basic functions such as traveling, communicating and surviving.

For example, human deep space operations will require transporting large amounts of equipment over long distances, usually months or years before astronauts arrive. That requires fuel-efficient solar electric propulsion, which differs from the chemical propulsion often used by launch vehicles and commercial satellites to escape the pull of Earth’s gravity.

The Power and Propulsion Element, which leverages Maxar’s decades of experience in electric propulsion, is essentially a reusable transport system that harnesses the sun’s energy to generate thrust. The Power and Propulsion Element will fly the largest ever “sun-to-thrust” electric propulsion system enabled by massive, high-power roll out solar arrays driving multiple electric thrusters. To enhance sustainability once on-orbit, the solar array will channel resources previously used for propelling the spacecraft to the Moon to supplying additional power for Gateway operations.

The element, to be launched in 2022 and then mated to additional modules over several years, is the first step in establishing an operations center for a sustainable human presence on the Moon and future crewed missions to Mars. Maxar is honored to play a key role in developing critical technologies for our return to the Moon, just as we did for the first Moon landing.

The development of advanced technologies for use on the Power and Propulsion Element and other space missions coupled with scientific findings from lunar and planetary exploration will be relevant to addressing problems on Earth, such as efficient resource usage and sustainable environments. With a spirit that mirrors Apollo in the 1960s, Artemis and other national and private space programs will inspire the next generation to innovate and develop technologies needed to meet humankind’s urgent challenges and help unite the world for common benefit.