Astrium’s Study...How To Tidy Up Space Without Causing Collision Cascading

[SatNews] The recovery of “non-cooperative” space debris is a complex task... 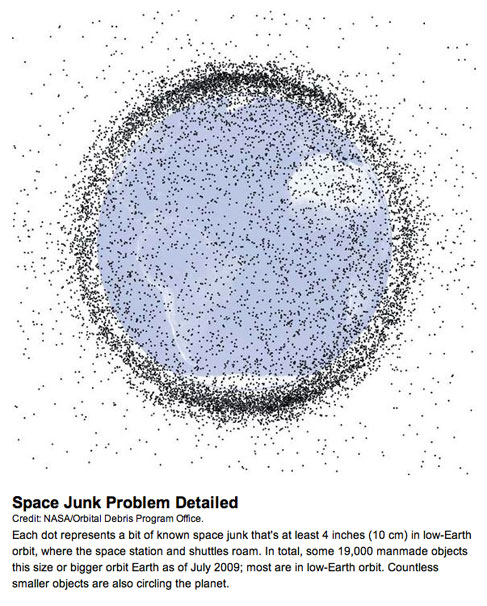 Astrium, Europe’s space technology company, has been awarded a study contract by the French space agency CNES. The study will analyze existing concepts and technologies and determine which can be used to successfully tackle large items of space debris, such as launcher stages and end of life satellites.

Entitled “The development of concepts and technologies for handling space debris”, the study is being conducted as part of the CNES’ Orbit Transfer Vehicle (OTV) program. It will help define the parameters necessary for developing suitable space vehicle concepts through a two-step approach named OTV-DEMO/X technological demonstrator, followed by a system demonstrator known as OTV-DEMO/Y.

It is expected that the development of these vehicles will be managed through international cooperation which will see Astrium initiating partnerships during this study phase that will be consolidated as the OTV program moves forward. Partnering Astrium in the study are Surrey Satellite Technology Ltd (SSTL, UK), an Astrium subsidiary, the Ecole Polytechnique Fédérale de Lausanne (EPFL, Switzerland), Bertin Technologies (France) and Oceaneering Space Systems (USA).

The study awarded to Astrium follows a 2011 study contract that identified a number of key concepts, which will now be consolidated, selected and expanded on. The most promising of them will be assessed with a view to identifying their cost and development schedule.

The recovery of “non-cooperative” space debris is a complex task that involves identifying it and then being able to approach it. Its state of decay following several decades in space and its overall orbit must then be assessed, prior to its seizure by suitable means and subsequent de-orbiting.

“Through this latest study, Astrium will pave the way to solving a major issue for all space users,” said Astrium Space Transportation CEO Alain Charmeau. “In mobilizing our industrial resources in conjunction with those of national agencies, we will put forward innovative solutions and technologies capable of dealing with space debris and thereby ensuring the sustainable development of space.”

Recent studies by the European Space Agency and NASA have shown that the amount of space debris—particularly in low Earth orbit—could cause “collision cascading” also known as the Kessler effect, which would hamper all space activity for 50 years. These studies also point out that the effect can be stabilized by removing, between now and 2020, between five and 10 items of large space debris. This is the scenario in which the OTV study entrusted to Astrium will be conducted.