There's an upcoming U.S. Air Force (USAF) Pitch Day that will be conducted during the week of November 4 to 8, 2019, in San Francisco, California.

This innovative event will find the USAF seeking ideas for: 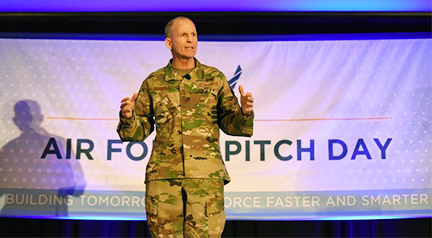 The Inaugural Air Force Pitch Day was held from March 6 to 7, 2019, in New York City — 51 companies were awarded contracts with a total initial value of $8.75 million in a matter of minutes.

The Air Force Pitch Day is modeled after commercial investment pitch competitions to deliver a faster, smarter approach to compete for ideas in the accelerating technology ecosystem. The process is a major departure from the lengthy contractual processes typically expected of the military and focuses on rapidly awarding Phase I Small Business Innovation Research, or SBIR, contracts to companies based on a simpler streamlined evaluation of white papers and in-person presentations.

USAF Vice Chief of Staff, General Stephen W. Wilson, emphasized that lowering barriers to access and empowering people — whether small businesses, industry, research labs or academia — allows the USAF to deliver speed of capability to the battlefield. He said that events such as Pitch Day allows the USAF to connect small businesses to the operator, then to a real problem and then bring those two together to build a partnership.

USAF contracting officials reviewed 417 submissions received during a 30 day application period and then invited 59 businesses to pitch their proposals in person on March 6. Of those 59 businesses, 51 received an initial award of as much as $158,000, with initial payment within minutes of their presentations.

The average amount of time to award contracts and pay companies via government credit card following a successful pitch at Air Force Pitch Day was 15 minutes. The fastest award occurred in only three minutes. Previously, the fastest award of a contract of this type was approximately 90 days — a period of time many small businesses and startups cannot survive through without funding.

Developing a same-day payment method via government credit card is key to helping businesses see the USAF as a preferred partner to growth, according to Dr. Will Roper, assistant secretary of the Air Force for acquisition, technology and logistics. He noted that the fact that these small businesses don’t have to go get loans, or bridges, waiting for that 120 days to get on contract is a big deal. It means they can focus immediately on working with the USAF, understanding the users and delivering for the warfighter. For those who think using a credit card is a gimmick, they need to come down and work with companies for whom money matters. This is the beginning of a big culture shift in the government. The USAF woke up and realized the organization was not the only funder or inventor of new technology anymore but are a partner with those who do.

More than 500 attendees from government, industry, academia, venture capital and investment communities also participated in Air Force Pitch Day back on March 7, which served as an open event that delivered a broader platform for invited companies to pitch to a larger community than just the Air Force.

During the entire week in March, the Air Force awarded 242 SBIR contracts valued at $75 million. Roper said the next challenge for the Air Force is to organize to do this type of activity at scale.

Information as to how to submit applications is available at this direct FedBizOps.gov infosite link...