[SatNews] "...to showcase the skills of national talents in developing and innovating new technologies and applications that can lead to a qualitative step forward in the field of space technology, boosting economic development and fostering a culture of scientific research and technological innovation."

The Emirates Institution for Advanced Science and Technology (EIAST) participated at the SPIE Optics + Photonics conference held recently at the Amsterdam RAI Exhibition and Convention Center in the Netherlands. Participating in the conference for the fourth consecutive time, EIAST had long strived to represent the UAE in international forums related to optics and photonics science and technology in addition to techniques used in satellite image processing to establish itself as a leader in the field. EIAST showcased a number of studies and scientific research conducted by Emirati engineers while developing a number of remote sensing programs and applications. 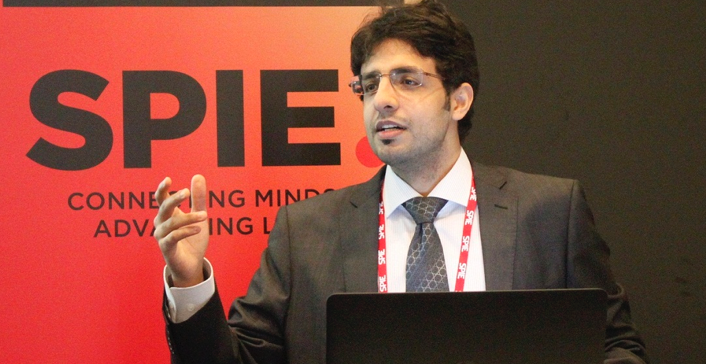 Saeed Al-Mansoori, Acting Head of the Applications Development and Analysis Center at EIAST, chaired a session comprised of sixth research papers in space science. He also presented two research papers on innovative technology on intellectual property rights protection for satellite imagery and discussed the latest innovations and practices developed by EIAST in this regard.

This paper is considered one of a series presented in the past three years, since this technology is developed on a yearly basis, so as to keep up with the latest innovations in the field which make it difficult to protect images worldwide. Al-Mansoori also presented a research paper entitled “Change Detection Tool Assessment” developed by EIAST through DubaiSat-2 imagery, which highlights characteristics of change detection tools in satellite images showing operational steps which help identify changes in a certain region over a period of time.

Eng. Eman Al-Tunaiji, from the Applications Development and Analysis Center, also participated in the conference speaking on the features of DubaiSat-2 and the type of camera used. She focused on satellite calibration, quality and standard control of images that she captured and studied in depth. Al-Tunaiji noted that EIAST’s team was able to achieve the targeted standards for satellite units within the timeframe and developed a plan to inspect standards every six months in order to maintain high performance.

H.E. Yousuf Al Shaibani, Director General, Emirates Institution for Advanced Science and Technology, stressed the importance of EIAST engineer’s participation in international conferences and forums which help shed light on UAE’s achievements in the field of space science and technology. “Our participation in the 2014 SPIE Optics + Photonics Conference provided us with the opportunity to showcase the skills of national talents in developing and innovating new technologies and applications that can lead to a qualitative step forward in the field of space technology, boosting economic development and fostering a culture of scientific research and technological innovation,” he added

EIAST was established by the Dubai Government in 2006 to encourage scientific innovation and technological progress in Dubai and in the UAE. It also aims to develop the scientific skills and knowledge of Emiratis. It is mainly involved in outer space research and development; satellite manufacturing and systems development; space imaging; and ground station services and support for other satellites. You are invited to learn more here.