Cygnus To Launch In 3D, Courtesy of NASA, ULA and Orbital ATK 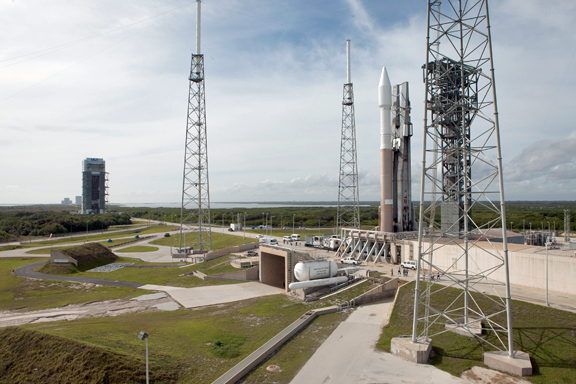 The United Launch Alliance Atlas V rocket is seen in a December 2015 image in place at Space Launch Complex 41 at Cape Canaveral Air Force Station in Florida. Sealed inside the payload fairing atop the rocket is the Orbital ATK Cygnus spacecraft filled with science, crew supplies and equipment that launched to the International Space Station on December 6, 2015.

NASA, in coordination with United Launch Alliance (ULA) and Orbital ATK, will broadcast the world’s first live 360-degree stream of a rocket launch.

The live 360 stream of the cargo resupply mission liftoff to the International Space Station may be viewed on the NASA Television YouTube channel starting 10 minutes prior to lift off at:

Orbital ATK’s Cygnus spacecraft will launch on a ULA Atlas V rocket carrying more than 7,600 pounds of science research, crew supplies and hardware to the orbiting laboratory. Launch is targeted for Tuesday, April 18, during a 30-minute window that opens at 11:11 a.m. EDT.

To view in 360, use a mouse or move a personal device to look up and down, back and forth, for a 360-degree view around Space Launch Complex-41 at Cape Canaveral Air Force Station, Florida. Note: not all browsers support viewing 360 videos.

YouTube supports playback of 360-degree videos on computers using Chrome, Firefox, Internet Explorer and Opera browsers. Viewers may use the YouTube app to view the launch on a smart phone. Those who own virtual reality headsets will be able to look around and experience the view as if they were actually standing on the launch pad.

While virtual reality and 360 technology have been increasing in popularity, live 360 technology is a brand new capability that has recently emerged. Recognizing the exciting possibilities opened by applying this new technology to spaceflight, NASA, ULA, and Orbital ATK seized this opportunity to virtually place the public at the base of the rocket during launch. Minimum viewing distance is typically miles away from the launch pad, but the live 360 stream enables viewers to get a pads-eye view.