Since the SPOT 1 launch 30 years ago, SPOT satellites have covered the land area of the Earth more than 700 times, setting a world record for spatial observation.

On February 22, 1986, a unique success story began: Europe’s first Earth observation satellite, SPOT 1, lifted off from Kourou on board an Ariane 1 launcher. It opened the door to three decades of major technological innovations and a host of new applications. Meanwhile, SPOT 6 and SPOT 7 represent the most recent steps of success and innovation. 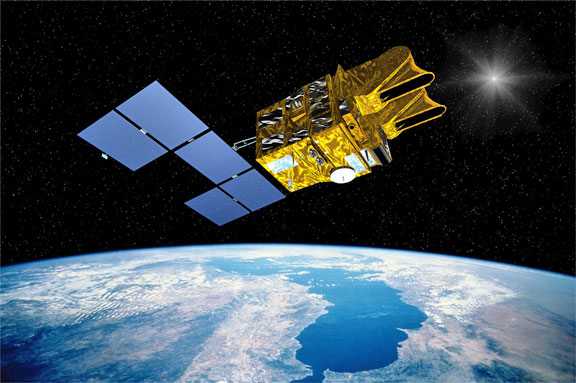 Artistic rendition of the SPOT-1 satellite.

Image is courtesy of CNES.

SPOT 1, conceived and designed by the French space agency CNES (Centre national d’études spatiales), was equipped with steerable mirrors, enabling it to look to the right and left of its path, unlike other Earth Observation(EO)  satellites during that time. Thanks to this first technological revolution, it was able to observe a given site every five days and measure the elevation of the terrain. It acquired images with a resolution of 10 meters for a footprint of 60 km, a swath/resolution ratio that was unique and one that has been retained by its successors.

Each following satellite in the SPOT family has seen performance improvements. A further milestone was reached with the arrival of SPOT 5 in 2002, offering images with a resolution of 2.5 meters and almost simultaneous stereo pair acquisitions. It paved the way for the commercial use of satellite images, in particular, its ability to offer precise coverage of large areas in record time for this level of precision.

The SPOT family then entered a new area. Based on the AstroBus-M platform, designed by Airbus Defence and Space, SPOT 6 and SPOT 7 offer even better performance than their predecessors, while at the same time being four times lighter (720 kg compared to three tonnes for SPOT 5). They also form a constellation of EO satellites equipped with reactive systems, thereby increasing acquisition capacity and simplifying data access. SPOT 6 and SPOT 7, which are absolutely identical and phased at 180° in the same orbit, allow daily revisit of any point on the globe, offering an acquisition capacity of six million square kilometers per day with a resolution of 1.5 m.

These satellites are also ‘agile’ and can rapidly turn to a point within a zone of 1,500 km around their position. It is no longer just the mirror that steers, but the entire satellite, thus making it possible to cover large areas in monoscopic as well as stereoscopic mode. Following a strategic cooperation agreement signed in 2014, SPOT 6 and SPOT 7 are now jointly operated by Airbus Defence and Space and Azercosmos.

SPOT satellites have covered the land area of the Earth more than 700 times during the course of the past 30 years, setting a surveillance record—with such a high level of precision—for our constantly changing planet. Today, thirty years after the lift-off of SPOT 1, Airbus Defence and Space’s SPOT 6/7 constellation is continuing to maintain the highest standards and supplies reliable data every day about the state of the world.

The technologies used on the SPOT satellites contributed to the commercial success of numerous other satellites designed and built by Airbus Defence and Space, the world’s number one exporter for earth observation satellites. They have been and key on Earth observation satellites like PeruSat-1, Falcon Eye or KazEOSat as well as complex scientific missions like Herschel, Gaia and the Rosetta comet probe. Like SPOT 6 and 7, satellites like KazEOSat-2, Ingenio or Sentinel-5P are based on the highly successful AstroBus-M platform. Together, AstroBus-M-based satellites have accumulated more than 23 years in orbit without any failure.