Eutelsat’s 8 West B Knows How To B The Super Host...By Offering Advanced Functions

[SatNews] The company claims, to be able to change the frequency of an uplink signal without any impact on the downlink frequency received by user terminals, marking a major breakthrough 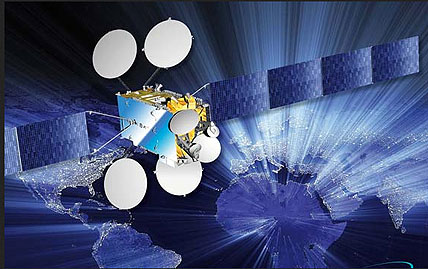 Eutelsat Communications will deploy a new generation of advanced functions satellite designed by European industry. This advances the performance, flexibility and signal security that are in the works to be released for the first time on the Eutelsat 8 West B satellite due to be launched in 2015.

These first-generation components planned on the high-power Eutelsat 8 West B satellite are designed to support the digital broadcasting market in the Middle East and North Africa.

The new functions developed by the satellite’s prime contractor, Thales Alenia Space, with the support of the European Space Agency (ESA) and CNES are focused on delivering three key benefits:

Following development within the framework of ESA’s ARTES and the CNES FLIP(1) programs, these features are reported to be entering the final qualification phase as part of the Atlas program that was launched by ESA in November 2012 to stimulate the acquisition of flight heritage of innovative equipment.

They will fly for the first time as first-generation components on the high-power EUTELSAT 8 West B satellite designed to support the digital broadcasting market in the Middle East and North Africa. The satellite will be located at the 7/8 degrees West video neighbourhood, one of the most dynamic in the global satellite TV market, already reaching into over 30 million homes.

The process of mitigating interference involves new-generation frequency converters behind the satellite’s receive antennas. This will put Eutelsat in the unique position, the company claims, to be able to change the frequency of an uplink signal without any impact on the downlink frequency received by user terminals, marking a major breakthrough in the bid for continuity of service for broadcast signals jammed by rogue uplink signals.

This technology to optimize distribution of electrical power involves embarking a new generation of equipment in the payload’s high power amplification system so that the electrical power used by a channel can be set according to its actual requirement at a given frequency. As the number of channels that can be operated simultaneously is directly linked to the amount of energy produced by solar panels, this innovation brings with it the potential to increase active channels.

With more flexible fleet deployment options innovation uses a new generation of command receivers that can be set to multiple options, giving enhanced operational flexibility for relocating a satellite from the original position for which it was designed to a new position. It will also improve coordination with other operators when a satellite moves from one position to another.