[SatNews]  According to Euroconsult's newly released report,  Earth Observation Requirements & Solutions in Latin America, the Latin American Earth observation market is undergoing significant expansion brought about by growing demand for Earth observation data and services, and governments' growing investment into the application to support this demand and help to develop national Earth observation industries. In this regard, the region is considered one of the most dynamic markets globally. 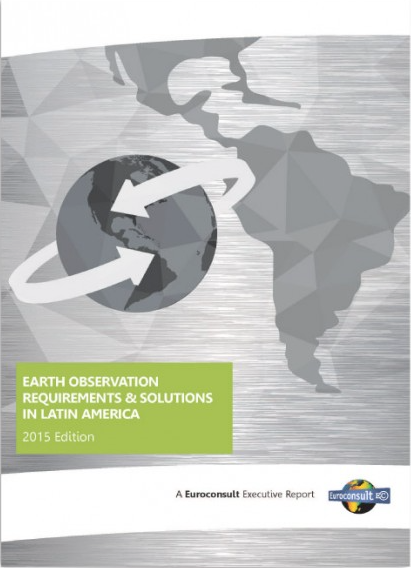 As of 2014 combined national investment into Earth observation systems developed is $193 million. This number is expected to increase substantially as further countries in the region are expected to invest in the application, and current investing countries expand their satellite portfolios. Consequently, the number of Earth observation satellites launched from Latin American programs is anticipated to grow to more than 25 over the coming decade, compared to just six launched in the last ten years.

Demand for Earth observation data has also increased significantly. "The data market in Latin America is estimated at $145 million in 2014; nearly half of all data sales are attributed to the defense sector, with natural resources monitoring, infrastructure and engineering, and energy following," said Ricardo Topham, Consultant at Euroconsult and editor of the report. "Brazil represents the largest national market, totaling a third of all data sales, followed by Mexico."

Demand is foreseen to continue to grow strongly, with a 10 percent CAGR forecast over 2014-2024, leading to a $355 million commercial data market. Multiple factors are expected to support this growth:

Robust demand from defense. Although impacted by the gradual increase of national proprietary systems, this supply is not expected to fulfill all regional demand for image intelligence solutions. Demand in natural resources mainly related to national forest monitoring programs, especially in Brazil and Mexico, although countries such as Argentina, Chile, and Colombia are also increasing demand for forestry and agriculture.

Infrastructure and engineering demand driven by Brazil and Mexico and their plans to invest billions of dollars in development projects over the next decade. Colombia and Chile are also foreseen to undertake projects to update road networks and public transport infrastructure.
Demand in the energy (oil, gas, minerals) sector, mainly in Brazil, Mexico, and Chile. Countries will be effected in the short to medium term related to the drop in oil prices; however the region remains resources-rich with new ventures expected to emerge.