Sierra Nevada Corporation (SNC) completed a NASA study for the Power and Propulsion Element (PPE), which is the first module planned to be launched for NASA’s Gateway in lunar orbit.

The study was performed under one of SNC’s Next Space Technologies for Exploration Partnerships-2 (NextSTEP-2) contracts. SNC plans to submit a bid to win the NASA contract when the agency issues its formal solicitation for the element later this year. The study included a comprehensive look to determine the operational uses of the PPE, if it fits NASA’s needs and the opportunity for multiple commercial applications. SNC was one of five companies selected for the study. 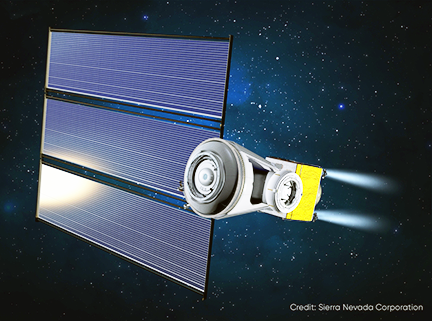 The PPE is the first element of the lunar Gateway and represents the beginning of human lunar and deep space presence in the 21st century.SNC’s NextSTEP-2 architecture concept works toward the Gateway initiative, which could be used for lunar exploration or an outpost for long-duration travel, such as missions to Mars. The PPE provides power generation and distribution, propulsion for orbit maneuvering and communications for the Gateway concept. SNC continues to develop the Gateway architecture through the company’s NextSTEP-2 Appendix A contract. The proposed SNC PPE design leverages technology developed for the Dream Chaser spacecraft cargo module which allows SNC to capitalize on previous technology and testing, therefore reducing costs.

Lindsey flew on five space shuttle missions for NASA and commanded three assembly and test missions to the International Space Station. He was inducted into the U.S. Astronaut Hall of Fame in 2015.