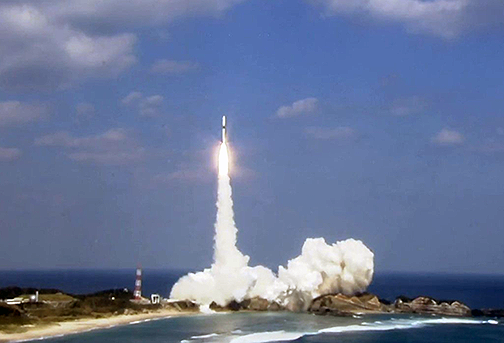 The MHI and JAXA launch of the GOSAT-2 and KhalifaSat satellites.

The launch and flight of H-IIA F40 proceeded as planned. The separations of GOSAT-2 and KhalifaSat were confirmed respectively at approximately 16 minutes and 09 seconds and 24 minutes and 15 seconds after liftoff.

GOSAT-2 developers enhanced the satellite’s focused, target-point observation capabilities (target-point observation functionality), enabling the device to gather accurate readings from a broader range of target points — an ability that will be especially beneficial in evaluations of industrial areas, densely populated areas, and other areas with large quantities of greenhouse gas emissions. 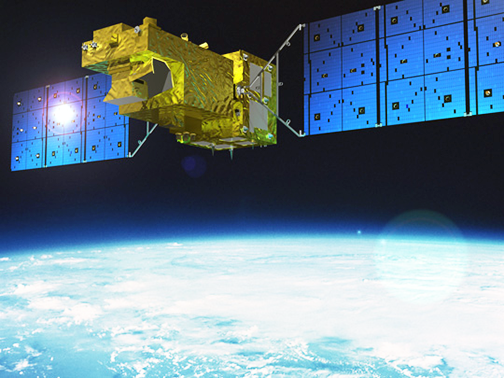 Artistic rendition of the GOSAT-2 satellite on orbit.

The KhalifaSat from the UAE's Mohammed Bin Rashid Space Centre (MBRSC) is the the first satellite built by Emirati engineers and is the third remote sensing satellite owned and operated by MBRSC. This satellite will boost the UAE position and competitiveness in satellite manufacturing and operations around the world.

This mission was performed along with Japan Aerospace Exploration Agency's (JAXA) Greenhouse gases Observing SATellite-2 ”GOSAT-2” satellite, in which the separation of the GOSAT-2 satellite was also confirmed 16minutes after liftoff. 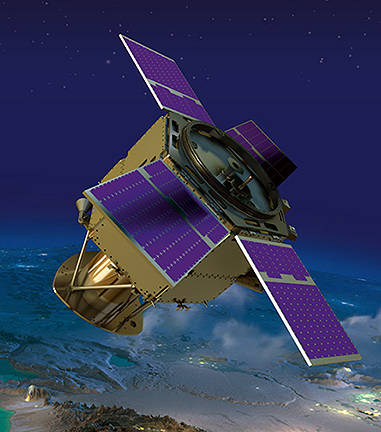 Additionally, MHI holds the launch service contract for the Emirates Mars Mission (EMM spacecraft, planned to be launched in 2020), through which it hopes to build upon a strong and lasting relationship with the MBRSC and UAESA (UAE Space Agency). 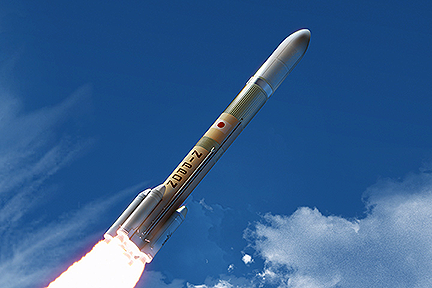 The successor to the H-IIA — the H3 Launch Vehicle — has been developed by MHI and JAXA. The concept of the H3 is highlighted to be much more customer-oriented by offering affordable pricing, relaxing environmental conditions for satellites and drastically reduced preparation time from contract to launch. The new launch vehicle will allow for more flexible and cost-efficient launch services, and is scheduled to make its maiden flight in 2020.

His Excellency Hamad Obaid Al Mansoori, Chairman of the Mohammed bin Rashid Space Centre (MBRSC), said that the successful launch of KhalifaSat; which bears the name of His Highness Sheikh Khalifa bin Zayed Al Nahyan, President of the UAE, marks a new milestone for the space sector in the UAE and the region. The first satellite fully manufactured in the United Arab Emirates at MBRSC facilities by Emirati engineers is in line with the directives of the leadership in transforming the UAE into a regional and international hub for space science and technology. With its five patents, MBRSC believes that KhalifaSat will play an important role in aiding organizations around the world in getting accurate data related to environmental changes and urban planning as well as support relief efforts at times of natural disasters. The company appreciates the valuable role played by the firm's Japanese partners and thanks them for their support in all the stages of this major project, providing all the necessary facilities to ensure that KhalifaSat is delivered successfully into space.

Naohiko Abe, SVP and Head of Integrated Defense and Space Systems of MHI, expressed his appreciation to all involved in the launch campaign for the devoted support and cooperation. In particular, he greatly appreciated that UAE's Space Agency and MBRSC continuously supported and cooperated with the company throughout the three-and-a-half years since MHI received the contract in February of 2015. The UAE government is the third overseas customer for MHI's Launch Services. With the results of this launch, the H-IIA and H-IIB have achieved 41 consecutive successful, on-time launches. MHI intends to expand their launch services business as the leading company of the Japanese space industry. Moreover, MHI is developing the H3 in partnership with JAXA. In succession of the H-IIA/IIB, the H3 will be a reliable and affordable next generation launch vehicle with a maiden flight planned for 2020 and the company expects to be awarded with H3 launch service contracts from potential customers in the upcoming days.