A glacier in Greenland that was previously one of the planet's fastest-shrinking is now growing, according to a new NASA study. 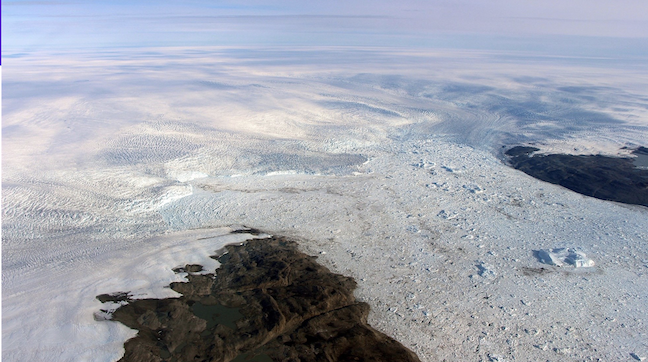 Patches of bare land are seen at the Jakobshavn glacier in Greenland in 2016, but the glacier ice has started to grow again, according to a study released on March 25, 2019. Study authors and outside scientists think this is temporary. NASA via AP

The study published Monday in Nature Geoscience reports that the Jakobshavn Isbrae glacier has been growing since 2016.

Greenland ice and climate scientist Jason Box, who was not part of the study, told The Associated Press that the finding "was kind of a surprise."

"We kind of got used to a runaway system," Box said.

Box told the AP that the glacier is "arguably the most important Greenland glacier because it discharges the most ice in the northern hemisphere."

The study linked the new growth of the glacier to the cooling of ocean waters in Disko Bay on the western coast of Greenland.

According to the AP, the authors of the study and other scientists believe the growth of the glacier is only temporary.

One author of the study, NASA climate scientist Josh Willis, said that the glacier's growth is "good news" in the short term but bad news in the long term because it reveals that ocean temperature plays more of a factor in glacier retreats and advances than scientists previously thought.

"In the long run we’ll probably have to raise our predictions of sea level rise again," Willis told the AP.

By Michael Burke, The Hill