U. S. Air Force Commemorates 60th Anniversary Of Heading In The Right Direction With GPS Systems 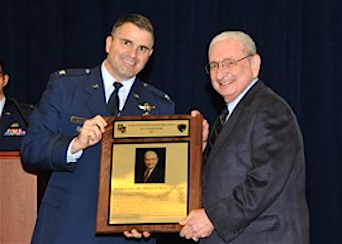 [SatNews] For a soldier operating under cover of darkness in enemy territory the biggest challenge is navigation due to unfamiliar territory and lack of easily identifiable landmarks on ground.

For a soldier operating under cover of darkness in enemy territory the biggest challenge is navigation due to unfamiliar territory and lack of easily identifiable landmarks on ground. Soldiers have been using night skies for ages to find out direction but their location on ground cannot be determined. The necessity of knowing their own position by troops during war was very clearly highlighted during the Gulf War (1990) and the Kargil conflict (1999). This can be judged from the fact that initially about 1000 GPS receivers were issued for use during the Gulf war but by the end nearly 9000 handheld devices were in use. Similarly, during the Kargil conflict, Indian patrols operating in rugged terrain along the line of control, initially strayed into enemy held areas with disastrous consequences but later on the availability of handheld GPS receivers proved to be invaluable to them. Special forces and crack teams also use these to reach and destroy vital enemy installations. Such teams can draw air and artillery fire accurately by providing the accurate positional data. Further, gun positions can be occupied quickly using GPS, as in modern warfare, artillery batteries must move often to keep pace with assault troops and to avoid being hit by counter fire. Convoy movements can also be tracked and planned effectively using GPS devices.

Modern day weapon systems are designed to use GPS data as input for targeting and guidance. Cruise missiles commonly used by U.S.to accurately hit targets from large standoff distances use multichannel GPS receivers to accurately determine their location constantly while in flight. The Multiple Launched Rocket System (MLRS) vehicle uses GPS based inertial guidance to position itself and aim the launch box at the target in a very short time.  This reduces the chances of detection and counter bombardment. The Exploitation of DGPS for Guidance Enhancement (EDGE) program of the US army has developed a 2,000 lb glide bomb, which uses a GPS seeker rather than a Laser for guidance. This bomb could accurately hit its target 11 miles from its drop point guided by four DGPS base stations about 1000 nautical miles away.

Rescue and emergency response is another area where GPS can prove invaluable to the military. Determining the location of a casualty during operations, emergency response teams can use the GPS to reduce response time. For example, the U.S. Air Force is already taking advantage of GPS based technology and is developing a Combat Survivor Evader Locator (CSEL) system. The new system integrates the GPS receiver with a communications radio so that search and rescue teams can locate downed aircrew members faster and more accurately than before.