Always good news when buildings are planned that will provide hundreds of jobs. And so it is with OneWeb Satellites, a joint venture between OneWeb and Airbus Group conducted their ground breaking at Kennedy Space Center’s Exploration Park. 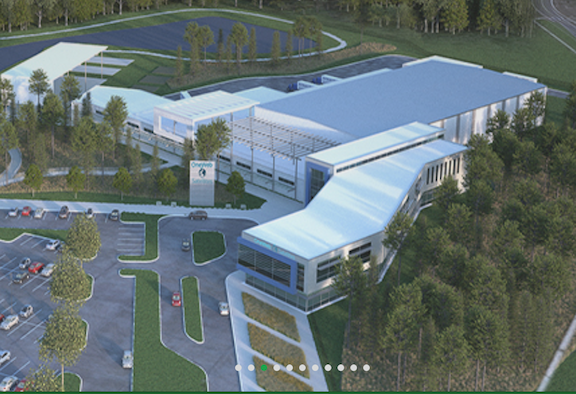 OneWeb Satellites hopes to open its facility next March or April, and to deliver the first satellite in the summer of 2018, and to produce a satellite every eight-hour shift.

The plans call for a 150,000 square-foot building to open within a year, where it will assemble more than 2,000 small communications satellites designed to expand affordable internet access around the world, and employ 250 people. OneWeb Satellites hopes to open its facility next March or April, and to deliver the first satellite in the summer of 2018, and to produce a satellite every eight-hour shift.

The company received a $1.2 billion investment from SoftBank, and announced plans to merge with satellite operator Intelsat. A first launch of 10 satellites, each weighing about 330 pounds, is tentatively targeted for May 2018, launching on a Soyuz rocket from French Guyana.

Last week, OneWeb bought five launches from Blue Origin, which is building a larger factory for construction of New Glenn rockets right across the street in Exploration Park.

Governor Rick Scott and OneWeb Satellites CEO Brian Holz were in attendance and were excited about the jobs that will be offered, which will be high-paying jobs and high-tech jobs,

OneWeb about a year ago announced it would build satellites on the Space Coast. The company plans to deploy a constellation of nearly 900 satellites in low Earth orbit, with a stated goal of bridging the digital divide by 2025 and connecting schools around the globe with Internet access.

By the mid-2020s, a single New Glenn rocket could launch dozens of OneWeb spacecraft — potentially close to 200 — from Launch Complex 36 at Cape Canaveral Air Force Station.