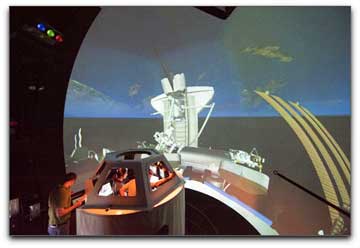 Image above: Astronauts Michael Barratt and Nicole Stott work in a simulated cupola at NASA's Johnson Space Center in Houston as they practice procedures they will use during the STS-133 mission. Image Credit: NASA
NASA is targeting approximately 4:33 p.m. EDT on November 1 for the launch of space shuttle Discovery's STS-133 mission and 4:19 p.m. EST on February 26, 2011, for the liftoff of shuttle Endeavour's STS-134 flight from the Kennedy Space Center in Florida.

The target dates were adjusted because critical payload hardware for STS-133 will not be ready in time to support the previously planned September 16 launch. With STS-133 moving to November, STS-134 cannot fly as planned, so the next available launch window is in February 2011.

NASA will schedule the official launch date for each mission following the agency's Flight Readiness Reviews, which typically occur about two weeks prior to launches. All target launch dates are subject to 'change.

For more information about the shuttle missions and their crews, visit