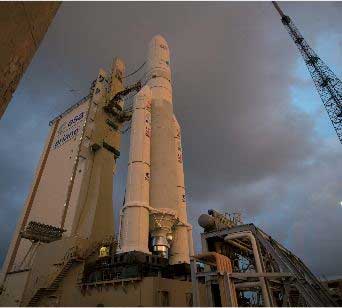 Ariane-5 is the workhorse launcher currently providing Europe with reliable, independent and guaranteed access to space. This launcher is also a commercial success, assuring an important share of the geostationary transfer orbit (GTO) satellite market, which in turn helps guarantee the sustainability of this European access. The success of Ariane has been based on its capacity to adapt to evolving market demands while keeping high standards of quality and worldwide competitiveness.

Today’s estimates for the evolution of this market in the long-term indicate an increase of mass for commercial and institutional payloads together with a need to perform versatile missions.
[SatNews] They have been approved and now can move forward — after a most important step...

More than 100 European specialists in different fields have validated Astrium’s preliminary design definition, development plan and specifications for the various sub-systems of the launcher that should allow the Ariane 5 Midlife Evolution program to continue full steam ahead with its development stage, once the financing is decided by ESA’s member states during the next Council at the Ministerial meeting, planned for November 2012.

The primary upgrade for the Ariane 5 launcher is a new upper stage equipped with a Vinci® restartable cryogenic engine, developed by Snecma (Safran group). The nose fairing will also be extended three meters to accommodate larger and heavier payloads.

Ariane 5 ME will be capable of placing up to 12 metric tons of payload in geostationary orbit, boosting the launcher’s capacity by 20 percent compared with the current Ariane 5 ECA. The ME version will also have an expanded range that covers all types of satellite orbits, meaning a larger commercial offer for Ariane while meeting the needs of institutional customers.

Alain Charmeau, CEO of Astrium Space Transportation, welcomed this major step forward for the European launcher, which is slated to enter service in 2017: “The Ariane 5 Midlife Evolution (ME) launcher will be capable of simultaneously placing two satellites of over five tons each in orbit, anticipating the needs of both commercial markets and EU institutions. Customers will be able to benefit from a ‘two-in-one’ launcher for the same price as the current Ariane ECA version, representing a price reduction of 20 percent per launched kilogram.”

The added value generated by Astrium’s unique role as end-to-end prime contractor for Ariane 5 since 2003 will allow the company to drive down costs.The acceptance of the PDR, which began on 31 August 2011, is a major step in the launcher validation process, and in particular for the new upper stage. It is also the culmination of thousands of hours of work by Astrium engineers in Les Mureaux and Bremen and by Astrium’s industrial partners.