[SatNews] Nearing the end of its third month of continuous operation, the International Space Station’s ship-tracking experiment has experienced a marked increase in data quality.

Now it operates along with a dedicated satellite carrying the same receiver. The Station’s Columbus laboratory is being used to track Automatic Identification System (AIS) signals from ships at sea. AIS is, in a way, the marine equivalent of the air traffic control system, with commercial vessels mandated to carry AIS transponders. Switched on in June, ESA’s ‘Columbus AIS’ (COLAIS) project involves two different receivers sharing the same external antenna. The Norwegian Defence Research Establishment (FFI) and Kongsberg Seatex are responsible for the NORAIS receiver being employed for the first three months of operations, switching to the LUXAIS receiver in September, which has been developed by Luxembourg-based LuxSpace and EmTroniX. 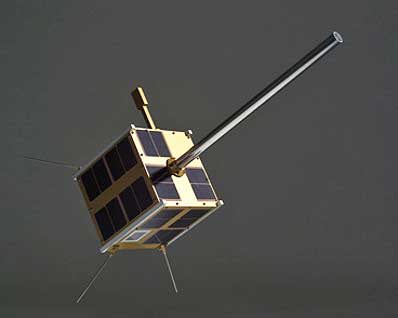 The first Norwegian satellite developed in Norway, AISSat-1 was launched on 12 July 2010. It is being used to detect AIS signals from ocean-going traffic in conjunction with a comparable experiment aboard ESA's Columbus module of ISS. Credits: Norwegian Space Centre
On 12 July, Norway launched its own AIS-detecting satellite, AISSat-1, developed in parallel with the NORAIS receiver. “We told ESA about having this satellite under development,” said Torkild Eriksen of FFI, NORAIS project manager. “They mentioned in turn they had just placed Columbus in space, an orbital laboratory for experimentation, so perhaps we should do something together. That was how it started, with the LuxSpace team showing a similar interest. Operating over a two year period, the shared experiment aims to contribute to an operational space-based AIS system, to broaden our picture of marine traffic on the high seas.”

AIS operates in a similar way to the mobile phone network: different transponders share radio channels by forming ‘self-organising cells’ on the same scale as the system’s range – about 40 nautical miles (70 km). If you fly over the ships in a plane, you will receive signals from neighbouring cells simultaneously, leading to co-channel interference. Fly over many more cells with a satellite and the result is extreme interference. “The challenge in space is that several AIS signals may arrive at the receiver at the same time, and we are testing to find out how to handle the resulting co-channel interference,” explained Mr. Eriksen. “Our receiver is what we call a software-defined radio, not a hardware-based analogue radio. The beauty of this approach is we update it with new algorithms that we test on the ground and then, when we’re happy we’ve made a step forward, we can upload the software to the ISS – or indeed our satellite – to create what is basically a second generation of receiver. The receivers in space are also being used to acquire samples of the unprocessed low-level signal which can then be downlinked for ground testing." 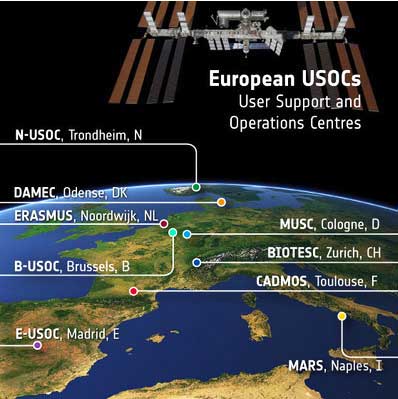 European USOCs - Credits: ESA
The results from NORAIS are being used for AISSat-1 as well as being ground-truthed against other data sources. The NORAIS team based near Oslo receive results via Norway’s User Support and Operations Centre (N-USOC) in Trondheim. Part of the European USOC network, this national hub serves ISS experimenters and maintains operational control of the COLAIS experiment, liaising with the Columbus Control Centre in Oberpfaffenhofen, Germany. “The experiment is part of ESA’s In-Orbit Demonstration Programme, giving innovative technologies access to ESA space platforms, including ISS,” explained Karsten Strauch, head of ESA’s COLAIS project. While the ISS orbits at an altitude of approximately 350 km at an inclination of 51.6 degrees, AISSat operates from polar orbit at a height of 700 km. “Both the NORAIS and AISSat receivers follow the same design and are operating in parallel, but from different orbits and inclinations," added Mr. Strauch "This means they provide perfect data for comparing and investigating the prospect of an operational AIS satellite constellation.”