[SatNews] They may seem like a new trend, but High Throughput Satellites (HTS) first launched in August 2005 with iPSTAR, nearly a decade ago.

Since iPSTAR, there has been a learning curve that HTS has been through, and to some extent, is still on. Applications, architectures, business models, orbits and coverage areas have all been tweaked and tested. All this while, being the newbie has given some leeway to HTS in terms of fill rates. Some beams have maxed out at launch while others have struggled to find customers. What impact does this have when operators plan replacements or even entire fleets of HTS? What do they tell investors for whom HTS is the new “must have”? Is bigger always better? Is global the new local? 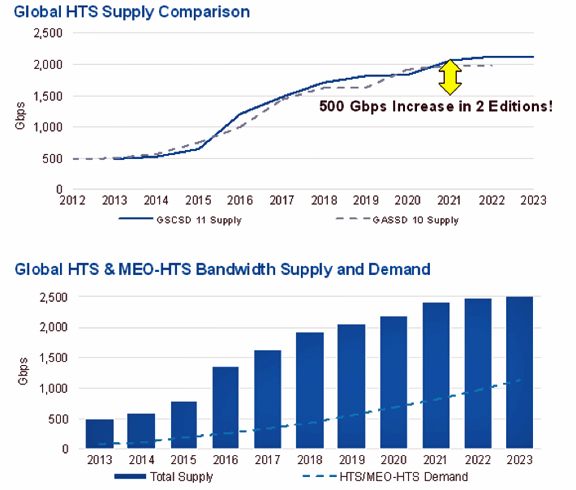 NSR’s Global Satellite Capacity Supply & Demand, 11th Edition report has forecast HTS supply and demand for more than six  years now. This graph shows how our forecasts have been revised upward of 500 Gbps in just two years. Also shown below is NSR’s forecast of fill rates across HTS globally, a figure that never crosses the 50 percent mark in the next decade.

Does this mean that beams aren’t filling up quickly enough?
The answer depends on which beam one is talking about. Every satellite operator launching HTS has learned, what is now, a seemingly obvious lesson. Some beams fill up faster than others, while some lag behind. Be it closed systems (ViaSat, Jupiter) or open ones (Avanti, Yahsat), there will always be beams that are oversubscribed while others have limited demand. For Government projects such as NBN, this has resulted in projections for system cost being revised multiple times. These systems aim to provide “broadband access to all,” which means different things in different beams. For private players such as Thaicom, this means going after seemingly unconventional applications—e.g., DTH in small countries under a single beam. Business models have had to change from closed to open in order to fill up beams. Governments have had to delay projects, or supplement them with military payloads. Success has come to rest upon two factors:

What does this mean for future missions?
NSR believes that HTS systems will go two ways depending on the approach (and investment profile) of the operator. Some large operators, like Intelsat and Inmarsat have gone global. Cover all land masses and oceans giving them enough leverage between regions to fill up beams with country-specific demand. Overlay these with “regional” beams allowing for traditional FSS-type sales that de-risk the HTS mission. This is capital intensive, but the upside is the ability to offer their largest customers the advantages of a single HTS system, no matter where they choose to operate.

Other large operators (SES and Eutelsat) have selected more tailored HTS payloads, usually with an anchor tenant consuming the vast majority of the spot beam capacity even before launch.  This is a lower risk approach but one that changes the sales strategy to targeting specific applications and customers within a region or country rather than truly global users. Smaller operators like Avanti, Yahsat and Thaicom have gravitated towards the latter model – small, focused payloads with emphasis on pre-sold capacity ensuring most beams remain filled from day one.

NSR believes that the latter (more focused) model will remain popular, increasing competition in the near term. This does not take away from global systems such as EpicNG and Global Express, and both have healthy backlogs already. However, these will tend to rely upon moving existing customers to HTS capacity rather than aggressively competing with an “ever falling” cost per bit. The bulk of the launches therefore, will be regional HTS payloads over growing economies with latent demand for broadband.

Bottom Line
HTS systems will continue to find their ground in a market that has so far been dominated by widebeam FSS. They’ve found a bandwidth hog in broadband but have been challenged by beams filling up too fast and too slow. When terrestrial technologies experienced a similar surge in demand they simply built as much capacity as possible either laying fiber or installing towers. Satellites do not have this advantage of waiting for demand to build up in a sub-region before investing in a tower or PoP. Neither can they upgrade hot spots on the fly. However, future missions will definitely adopt a focused and targeted approach to putting up HTS beams—a coming of age of sorts.

For additional information regarding this NSR report, please visit http://www.nsr.com/research-reports/satellite-communications/global-satellite-capacity-supply-and-demand/

Story by Prashant Butani of NSR