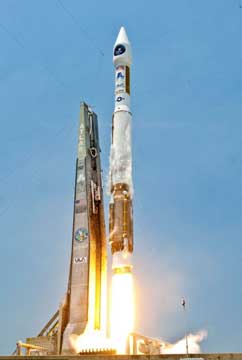 Today is another story, with all systems go and so begins a new era with the success of this critical launch. A United Launch Alliance Atlas V rocket carrying the Space-Based Infrared System (SBIRS) satellite for the United States Air Force lifted off from Space Launch Complex-41 here at 2:10 p.m. EDT today. This marks the 50th successful launch for ULA since the company was formed in December 2006.

"With this launch, ULA continues to demonstrate its commitment to 100 percent mission success,” said Michael Gass, ULA President and CEO. “This milestone is a testament to the dedicated employees that for every mission deliver excellence, best value and continuous improvement to our customers.”

This mission was launched aboard an Atlas V 401 vehicle configuration, which includes a 4-meter diameter payload fairing. The booster for this mission was powered by the RD AMROSS RD-180 engine and the Centaur upper stage was powered by a single Pratt & Whitney Rocketdyne RL-10A engine. "This is a very important day for our customers and for our nation,” said Jim Sponnick, ULA vice president, Mission Operations. “The ULA team is extremely proud to have served with this strong government and industry team in successfully launching the SBIRS GEO-1 satellite on its critical mission.”

ULA's next launch is the Delta II Aquarius mission currently scheduled for June 9, 2011 from Space Launch Complex-3 at Vandenberg Air Force Base, California. 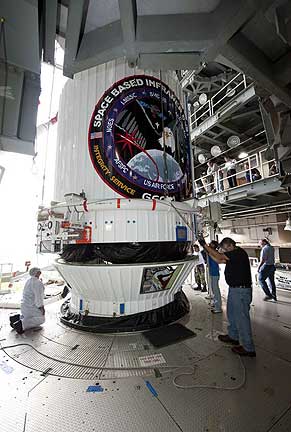 The SBIRS GEO 1 mission is mated to its Atlas v booster in preparation for launch from Space Launch Complex-41 at Cape Canaveral Air Force Station.
SATELLITE AND SENSOR DESCRIPTION
SBIRS GEO spacecraft will be a stabilized platform with a scanning sensor and a staring sensor. Sensor pointing will be accomplished with pointing mirrors in front of the telescopes.

The GEO scanning sensor will provide a shorter revisit time than that of DSP over its full field of view, while the staring sensor will be used for step-stare or dedicated stare operations over smaller geographic areas.

The GEO staring sensor has high agility to rapidly stare at one earth location and then move to other locations, with improved sensitivity compared to DSP. Several areas can be monitored by the staring sensor with revisit times significantly smaller than that of DSP.

The SBIRS HEO sensor is a scanning sensor similar to the GEO scanner but the sensor pointing is performed by slewing the full telescope on a gimbal. SBIRS GEO and HEO sensor raw unprocessed data will be down-linked to the ground, so that the same radiometric scene observed in space will be available on the ground. 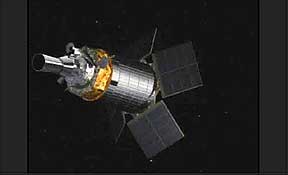 SBIRS features a mix of geosynchronous earth orbit (GEO) satellites, payloads in highly elliptical earth orbit (HEO), and associated ground hardware and software. SBIRS offers improved sensor flexibility and sensitivity compared to DSP. Sensors will cover short-wave infrared like its predecessor, expanded mid-wave infrared and see-to-the-ground bands allowing it to perform a broader set of missions as compared to DSP. Both HEO payloads and associated ground systems have been certified for Integrated Tactical Warning/Attack Assessment (ITW/AA) operations. HEO - 1 has also been certified by the National Geospatial -Intelligence Agency (NGA) for use in Technical Intelligence. The first GEO satellite is expected to launch in fiscal year 2011.

SBIRS GROUND SEGMENT
The SBIRS Ground Segment is developed and fielded in blocks of capabilities. It will consist of three major components: two fixed operational sites, relay ground stations that send data back to the fixed sites, and associated communications links.

The SBIRS ground segment will provide capabilities to support transition, launch, and mission operations for both the GEO satellites and HEO sensors, and support on-orbit operations for the DSP satellites.

Relay Ground Stations, located around the world, receive data from the satellites and forward it to the Mission Control Station at Buckley Air Force Base, Colorado. MCS software generates launch reports that include missile type; launch point, time and azimuth; and predicted impact point. Data used from multiple satellites is fused to improve reports.

The MCS operates the DSP satellites today and will have the capability to operate the SBIRS payloads and spacecraft from the consolidated location in the future. The MCS marked the first step in the deployment of SBIRS, and was declared operational in 2001.