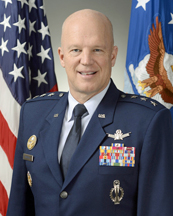 General Raymond said that space is a warfighting domain, just like air, land and sea. Strong alliances are vital, and the U.S. National Space Policy is clear on the importance of partnering with nations that share U.S. objectives to promote the preservation and long-term sustainability of the space environment. The CSpOC positions the U.S. and allied space forces to deter a conflict from extending into space, and should deterrence fail, to fight and win. The CSpOC will be essential to protecting, advancing and elevating our combined space capabilities, which fuel our country's way of life, our economy and our nation's security.