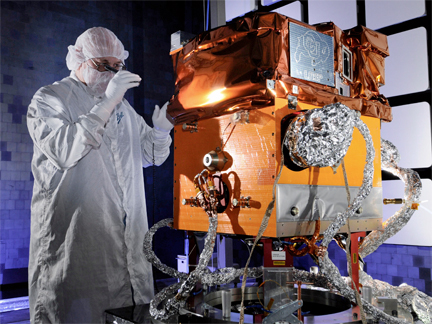 Photo of work being done on the STPSat-3.
Photo is courtesy of Ball Aerospace.

The satellites were carried aboard an Orbital Space Sciences Minotaur I Vehicle, from NASA's Goddard Space Flight Center's Wallops Flight Facility, Virginia.  STPSat-3 launched along with numerous CubeSats as part of the ORS-3 mission. Spacecraft separation occurred shortly after lift-off and all 29 payloads were successfully delivered to the desired orbit.

The STPSat-3 is the second launch of a Department of Defense Space Test Program Standard Interface Vehicle and is the second vehicle operated on the Multi-Mission Satellite Operations Center ground system from the Research and Development Test and Evaluation Support Complex, both located at Space Development and Test Directorate on Kirtland AFB.

The ORS-3 Mission, also known as the Enabler Mission, demonstrates launch and range improvements to include: Automated vehicle trajectory targeting, range safety planning, and flight termination; a commercial-like procurement and Federal Aviation Administration licensing of the Minotaur I rocket; and the Integrated Payload Stack consisting of 29 spacecraft.  These enablers not only focus on the ability to execute a rapid call up mission, but they also automate engineering tasks, which reduce timelines from months to days, and in some cases hours, result in decreased mission costs.