A successful capture was completed by the SSTL-developed RemoveDEBRIS satellite. 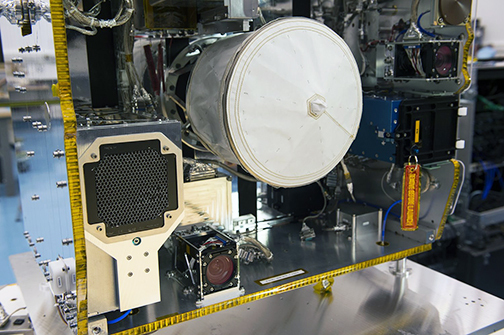 The harpoon was fired at a speed of 20 meters per second and penetrated a target made of satellite panel material.  The harpoon and 1.5 meter target boom were designed by a team at Airbus in Stevenage, UK.   The photo to the right shows the harpoon target bottom left, with the onboard camera to the right.  The spherical structure in the center with the white cover is the net housing.

The success of the harpoon firing marks the third successful experiment for the RemoveDEBRIS project which has already demonstrated a net capture experiment and trialed its state-of-the-art LiDAR based vision navigation system to identify a target cubesat.

The RemoveDEBRIS satellite platform was designed and manufactured by SSTL to house two target cubesats and four debris removal technologies — a net, a harpoon, vision based navigation using cameras and LiDaR, and a de-orbit dragsail.  The spacecraft is operated in orbit by SSTL's engineers from the company's Spacecraft Operations Centre in Guildford, UK.

The RemoveDEBRIS team is now preparing for the final experiment, which is scheduled to take place in March and will witness the RemoveDEBRIS spacecraft inflate a sail that will drag the satellite into Earth’s atmosphere for destruction. A video produced by SSL of this event is available for viewing at this direct link...

The U.S. Space Surveillance Network tracks 40,000 objects and the estimate is that there are more than 7,600 tons of ‘space junk’ in and around Earth’s orbit — with some moving faster than a speeding bullet, approaching speeds of 30,000 miles per hour.

The RemoveDEBRIS project is co-funded by the European Commission and the research leading to the results has received funding from the European Union Seventh Framework Program (FP7/2007-2013) under grant agreement n°607099.