Nimiq-5 Into The Sky 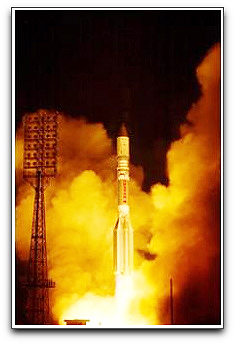 International Launch Services (ILS) has successfully carried the Nimiq 5 satellite into orbit on an ILS Proton for Telesat, the fourth largest fixed satellite services operator worldwide. This was the fifth commercial mission of the year for ILS and the seventh successful Proton launch of 2009. With the launch of Nimiq 5, ILS has now launched half of Telesat’s operational fleet.

The ILS Proton Breeze M launched from Pad 39 at the Baikonur Cosmodrome at 1:19 a.m. today local time (19:19 GMT, 12:19 PDT; 15:19 EDT, September 17). After a 9 hour, 15 minute mission, the Breeze M successfully released the Nimiq 5 satellite, weighing almost 5 tons, into geostationary transfer orbit. This was the 348th launch for the Proton. The Proton Breeze M vehicle was developed and built by Khrunichev Research and Production Space Center of Moscow (Khrunichev), Russia’s premier space manufacturer. Telesat’s Nimiq 5, built by Space Systems/Loral (SS/L), will be located at 72.7 degrees West. The satellite will provide coverage of North America and supports growing demand for DTH television services. This is the fifth SS/L-built satellite in Telesat's global fleet. It is based on the SS/L 1300 platform and is designed for a lifespan of more than 15 years.