NASA—Laser Dissemination From The ISS (Comms) 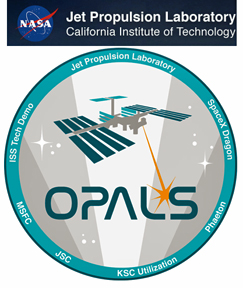 Transmission of "Hello, World!" as a video message was the first 175 megabit communication for the Optical Payload for Lasercomm Science (OPALS), a technology demonstration that allows NASA to test methods for communication with future spacecraft using higher bandwidth than radio waves.

"The International Space Station is a test bed for a host of technologies that are helping us increase our knowledge of how we operate in space and enable us to explore even farther into the solar system," said Sam Scimemi, International Space Station division director at NASA Headquarters in Washington. "Using the space station to investigate ways we can improve communication rates with spacecraft beyond low-Earth orbit is another example of how the orbital complex serves as a stepping stone to human deep space exploration." 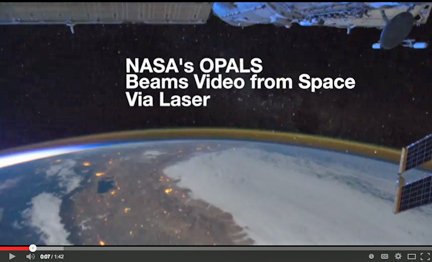 Optical communication tools like OPALS use focused laser energy to reach data rates between 10 and 1,000 times higher than current space communications, which rely on radio portions of the electromagnetic spectrum. Because the space station orbits Earth at 17,500 mph, transmitting data from the space station to Earth requires extremely precise targeting. The process can be equated to a person aiming a laser pointer at the end of a human hair 30 feet away and keeping it there while walking. To achieve this extreme precision during the demonstration, OPALS locked onto a laser beacon emitted by the Optical Communications Telescope Laboratory ground station at the Table Mountain Observatory in Wrightwood, California, and began to modulate the beam from its 2.5-watt, 1,550-nanometer laser to transmit the video. The entire transmission lasted 148 seconds and reached a maximum data transmission rate of 50 megabits per second. It took OPALS 3.5 seconds to transmit each copy of the "Hello World!" video message, which would have taken more than 10 minutes using traditional downlink methods.

"It's incredible to see this magnificent beam of light arriving from our tiny payload on the space station," said Matt Abrahamson, OPALS mission manager at NASA's Jet Propulsion Laboratory (JPL) in Pasadena, California. "We look forward to experimenting with OPALS over the coming months in hopes that our findings will lead to optical communications capabilities for future deep space exploration missions."

The OPALS Project Office is based at JPL, where the instrument was built.  OPALS arrived to the space station April 20 aboard SpaceX's Dragon cargo spacecraft and is slated to run for a prime mission of 90 days.