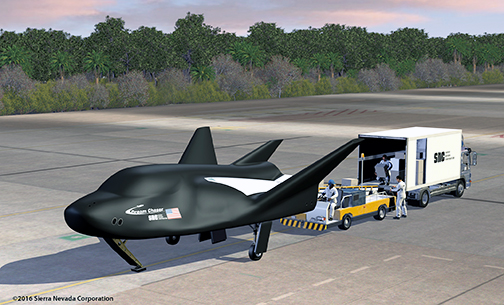 Many critical parts of the orbital vehicle are already complete, built and being tested, including major structural components, thermal protection system tiles and avionics hardware.  With the success of IR4, these components are now being integrated into the orbital vehicle assembly at SNC’s Space Systems facilities in Louisville, Colorado.

Subject matter experts from NASA and SNC thoroughly reviewed the Dream Chaser spacecraft design and its integrated performance with launch, ground and flight elements. Based on system capabilities, design maturity and the extensive data products presented, SNC and NASA jointly concluded the Dream Chaser program was ready to move to full-scale spacecraft manufacturing and testing. 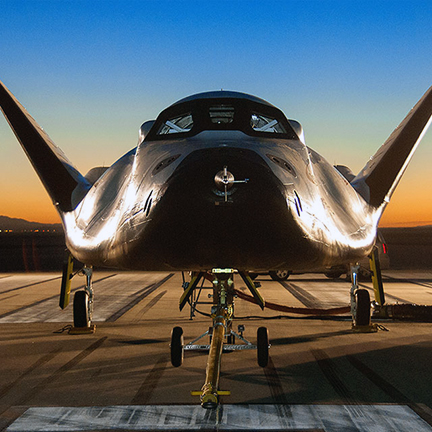 Photo of the Dream Chaser spacecraft. Photo is courtesy of Sierra Nevada Corp.

SNC’s Dream Chaser spacecraft is slated to service the International Space Station as early as late 2020. Production includes both the uncrewed Dream Chaser winged vehicle and the cargo module, which remains attached to the winged vehicle during orbital operations.

The Dream Chaser will perform at least six missions to provide cargo resupply, disposal and return services to the International Space Station under NASA’s CRS-2 contract.  The spacecraft delivers up to 5,500 kg. (~12,100 lbs.) of pressurized and unpressurized cargo and returns over 1,850 kg. (~4,000 lbs.) of cargo with a gentle runway landing.  The spacecraft also provides approximately 3,400 kg. (~7,400 lbs.) of disposal capability each mission via the cargo module, which burns up in the atmosphere after separation from the Dream Chaser winged vehicle.

John Curry, program director for CRS-2 under SNC’s Space Systems business area, said that NASA's acknowledgement that SNC has completed this critical milestone and its approval of full production of the first Dream Chaser spacecraft is a major indication the company is on the correct path toward increasing vital science return for the industry.

Fatih Ozmen, co-owner and CEO of SNC, added the company is now one step closer to the Dream Chaser spacecraft’s first orbital flight.  This comprehensive review approved moving the Dream Chaser program into the production phase so the company can get Dream Chaser to market as a critical space station resupply spacecraft as soon as possible. IR4 was a series of reviews, documentation, and data deliverables that are the culmination of many years of design work, analysis and development testing.