Ball Aerospace recently received a Group Achievement Award from NASA's Ames Research Center in California's Silicon Valley, which recognized the company for the innovative solution that enabled the continued use of the Kepler spacecraft for the K2 science mission. 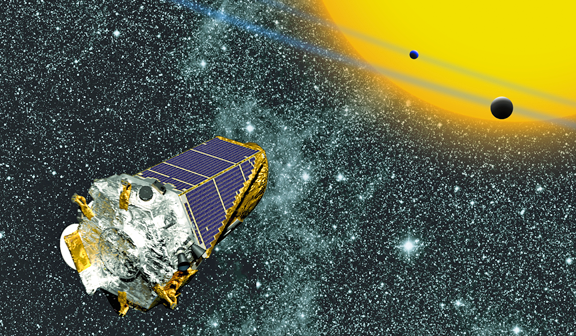 After Kepler completed its primary mission, the second of four reaction wheels on Kepler ceased to work properly, preventing Kepler from continuing to point with precision. In May of 2013, the Ball Aerospace Flight Planning Center (FPC) prevented a potential mission ending failure with a clever technique of using the solar pressure to hit Kepler and combining that approach with some of the thrusters to control the telescope. The FPC proposed, designed, tested and implemented the new approach that enabled the continued collection of scientific data — dubbed the K2 mission and expanded its scientific return dramatically.

For nearly a decade, the Kepler and K2 missions have observed more than a half million stars and shown that the galaxy is teeming with terrestrial-size worlds. Many of those planets are near in size to Earth and orbiting in the habitable zone of their parent stars where liquid water could pool on the surface.

As the mission prime contractor on Kepler, Ball Aerospace built the spacecraft and photometer and was responsible for system integration, testing and on-orbit operations. Now retired, Ball engineer Doug Wiemer was also awarded the NASA Exceptional Public Achievement Medal for his contribution to the K2 mission solution. The K2 mission used an innovative method to control spacecraft pointing by managing solar pressure and using thrusters. The FPC team was able to restart science collection in a matter of months and within the existing budget. Since 2013, the FPC team continued to identify and implement performance improvements including improved science pointing precision, higher science data downlink rates, more effective fault protection, and improved fuel efficiency. NASA retired the Kepler Space Telescope on October 30, 2018.

Kepler has changed history by educating humanity about the universe, helped to verify that there are planets everywhere and that there are many places where life may exist. Nearly every star in the sky has at least one planet around it.

Makenzie Lystrup, VP and GM, Civil Space, Ball Aerospace, said that the company culture fosters a collaborative and inclusive work environment, which enables the firm to understand the needs of, and work closely with, NASA. The team's creative and collaborative approach became the K2 mission, which enabled further exploration and data gathering in the ongoing search for life, helping to uncover that this universe has far more planets than were ever imagined.