Both payloads for Arianespace’s upcoming Ariane 5 mission to explore the universe are now in French Guiana, following this week’s delivery of the Planck observatory to the Spaceport.

Planck arrived at Cayenne’s Rochambeau Airport aboard a chartered An-124 cargo jetliner on the evening of February 18th and was transferred to the Spaceport’s S1B clean room to join the Herschel space telescope — which has been in French Guiana since February 12th. Planck is moved into the S1B clean room at Europe’s Spaceport, joining its “sister” spacecraft for Ariane 5’s upcoming launch – the Hershel telescope, which is undergoing processing in the background.

Planck and Herschel will be launched by an Ariane 5 on April 16th, marking the first mission of its kind performed by Arianespace at the service of the international space science community. The two spacecraft will be deployed in very elliptical orbits, enabling both spacecraft to follow transfer trajectories for their 1.5 million kilometer voyage to the second Lagrange point (L2) of the Sun-Earth system. Thales Alenia Space built both Planck and Herschel for the European Space Agency, working with one of the largest industrial teams ever assembled for this type of project. 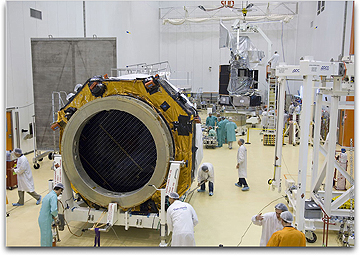 Planck is equipped with a six-stage cooling system to observe the Cosmic Microwave Background. Astronomers use small fluctuations in the temperature of this radiation to understand both the origin of the universe and the formation of galaxies. The Planck spacecraft will weigh approximately 1,900 kg. at launch, and is to ride in the lower position in the Ariane 5’s payload “stack.” It has a height and maximum diameter of 4.2 meters, and carries a telescope with a 1.5-meter primary mirror.

Herschel will have a launch mass of about 3,300 kg., and will be installed in Ariane 5’s upper payload slot. The tubular-shaped spacecraft is 7.5 meters high and 4 meters wide and is designed to investigate how stars and galaxies are formed, as well as provide information on how they continue to evolve. The spacecraft’s 3.5-meter-diameter will make Herschel the largest telescope in orbit until the arrival of the James Webb Space Telescope in 2013 (which also will be launched by Ariane 5). Arianespace’s April 16 mission with Herschel and Planck will be the second Ariane 5 launch of 2009.

(Photos: Planck arrives in French Guiana for delivery to Europe's Spaceport and Planck in the S1B clean room at the Spaceport, courtesy of Arianespace)