SpaceX Did It...'Of Course I Still Love You' Launches + Returns With A Perfect Three-Point Landing 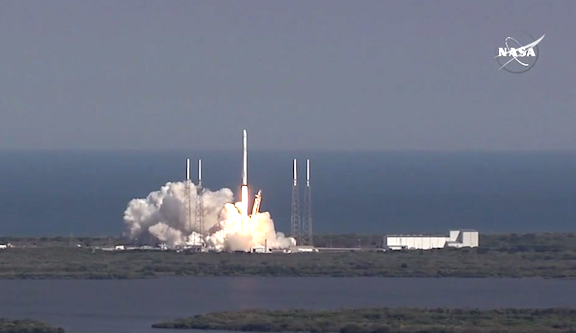 The launch went smoothly with the objective being the Falcon 9 rocket's launch of SpaceX's Dragon cargo delivery of supplies to the NASA's ISS, which is still in transit. But the real nail-biter came when the experimental landing of the Falcon 9 rocket came back to Earth at a tremendous speed and yet ever so gracefully gently touched down on the floating pad in the Atlantic ocean—and the water was choppy with waves that could have potentially caused seasickness. To our eyes it looked as though it was a reverse of the launch video. 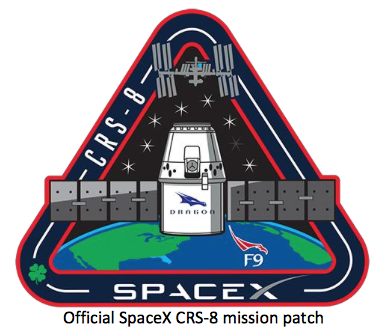 There is friendly competition between Elon Musk of SpaceX and owner of Amazon, Jeff Bezos', Blue Origin Rocket which took off and landed on January 22 this year and November 23, 2015, while Musk's first success was December 20, 2015.  Today's launch was a special challenge while on a water pad subject to the weather and ocean waves.

The Dragon spacecraft will be filled with about 7,000 pounds of critical supplies and payloads for the space station crew, including materials to support dozens of the approximately 250 science and research investigations that will occur during Expeditions 47 and 48. Dragon’s unpressurized trunk will carry the approximately 3,100 pound Bigelow Expandable Activity Module, or BEAM, that will attach to the space station and demonstrate expandable in-space habitat technology. 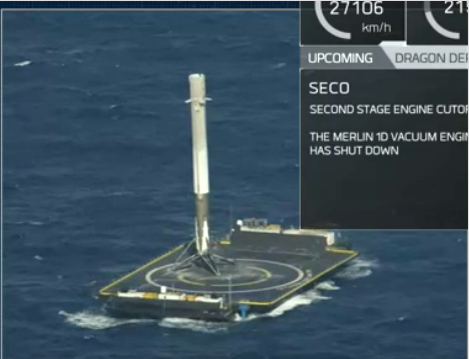 Mission accomplished! A perfect upright landing despite the choppy sea.

SpaceX CRS-8 is the eighth of up to 20 missions to the International Space Station that SpaceX will fly for NASA under the CRS contract. In January 2016, NASA announced that SpaceX’s Falcon 9 launch vehicle and Dragon spacecraft have been selected to resupply the space station through 2024 as part of the second Commercial Resupply Services contract award. Under the CRS contracts, SpaceX has restored an American capability to deliver and return significant amounts of cargo, including live plants and animals, to and from the orbiting laboratory. A version of Dragon is also being developed for astronaut transport to and from the ISS.

About two days after launch, International Space Station crew members will use the station’s 57.7-foot (17.6-meter) robotic arm to reach out and capture the Dragon spacecraft and attach it to the station.

“The cargo will allow investigators to use microgravity conditions to test the viability of expandable space habitats, assess the impact of antibodies on muscle wasting, use protein crystal growth to aid the design of new disease-fighting drugs and investigate how microbes could affect the health of the crew and their equipment over a long duration mission,” said NASA Deputy Administrator Dava Newman.

Dragon will return to Earth after just over a month's stay at the ISS. Approximately five hours after the Dragon leaves the station, it will conduct its deorbit burn, which lasts up to 10 minutes. It takes about 30 minutes for the Dragon to reenter the Earth’s atmosphere and splash down in the Pacific Ocean off the coast of California.