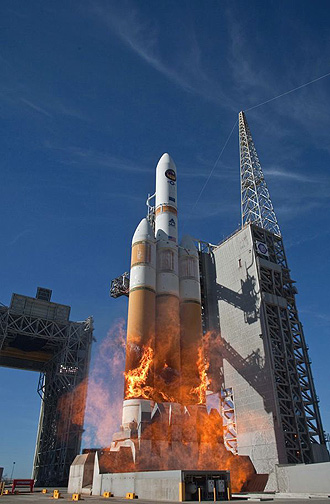 Vandenberg AFB, Calif., (Jan. 21, 2011) - A United Launch Alliance Delta IV Heavy launches with a National Reconnaissance Office payload at Space Launch Complex-6 at 1:10 p.m. PST.  The Delta IV Heavy is the largest rocket ever launched from the west coast of the U.S. standing 235 feet tall and producing nearly 2 millions pounds of thrust at liftoff.
[SatNews] On time except for a two minute delay to avoid an object in space that could have been in the path of the rocket if it launched at 1:08 p.m.  With the two minute delay it wasn't an issue.

And so today, a United Launch Alliance Delta IV Heavy rocket carrying a payload for the National Reconnaissance Office (NRO) successfully lifted off from Space Launch Complex-6 at 1:10 p.m. PST. The Delta IV Heavy, at 235 feet or approximately 23 stories tall, is the largest rocket ever to launch from the West Coast of the United States. The mission is in support of national defense.

"Today’s launch was the second Delta IV Heavy launch for the NRO in two months and was also the largest rocket ever launched from the west coast,” said Jim Sponnick, ULA vice president, Mission Operations.  “Most important is the critical NRO payload launched today which will significantly enhance the effectiveness and safety of the brave men and women defending our nation every day.  Today’s successful launch represents the culmination of five years of hard work and exceptional skill in modifying the launch system to establish the west coast heavy lift capability for the nation and to integrate this important mission.  I congratulate the combined NRO, Air Force, supplier and ULA team on this impressive accomplishment and successful launch.” 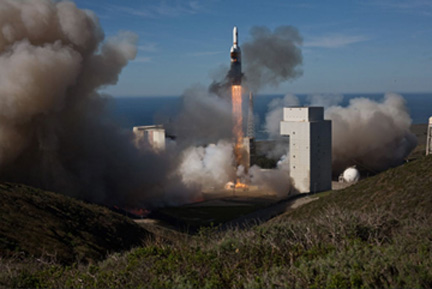 Since 1957, the Delta rocket, and its predecessor Thor, have carried satellites into orbit that have brought our world closer together and helped deepen our understanding of the universe.