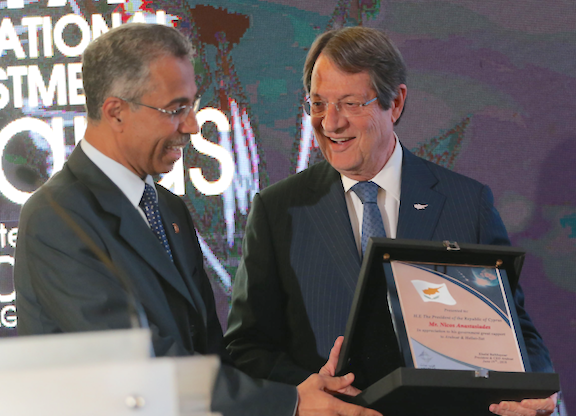 Since 2012, a total of 54 CIPA International Investment Awards have been given to companies, organizations and individuals as a tribute and a “thank you” for helping Cyprus to gain a reputation for excellence as an International Business Center. They include organizations that have invested directly in Cyprus and created a value-added element for the economy, or established operations and provided employment in Cyprus, or provided services to international investors and helped to attract other foreign investors in Cyprus.

Arabsat has been chosen for this prestigious award due to its acquisition in 2013 of Hellas Sat, the owner and wholesaler of capacity and services of the Greek and Cypriot Hellas Sat satellites, for more than 200 million euro, and its subsequent multi-million euro investment plan for new satellites and infrastructure in Greece and Cyprus.

The award was handed by the President of Cyprus to Mr. Khalid Balkheyour, President and CEO of Arabsat (see photo at right) who stated that ARABSAT accepts with great honor the CIPA award and came to Cyprus to stay for a long time.  The business environment and the strategic geographic position of Cyprus are the main factors for their successful operations. Since Hellas Sat became member of ARABSAT group they expanded their operations with the launch of HS3 satellite and the procurement HS4 which is expected to launch at the end of 2018.