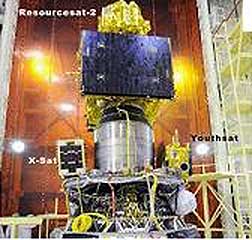 [SatNews] Persistance paid off for the Indian space agency ISRO.

The Polar Satellite Launch Vehicle (PSLV-C16) took off from the Sriharikota launch site in eastern India. This success was a relief for the Indian Space Research Organization after a series of failed launches.

Resourcesat-2, the mission's biggest satellite weighs in at 1,206-kilogram, will replace Resourcesat-1, which was launched in 2003. India is looking to emerge as a global player in the lucrative satellite launch market.