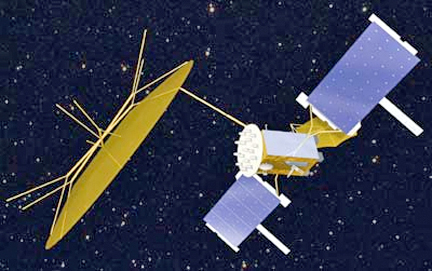 Artistic rendition of a MUOS satellite.

MUOS-4 is the latest addition to a network of orbiting satellites and relay ground stations that is revolutionizing secure communications for mobile military forces. Users with operational MUOS terminals can seamlessly connect beyond line-of-sight around the globe and into the Global Information Grid. MUOS’ new smart phone-like capabilities include simultaneous, crystal-clear voice, video and mission data, over a high-speed Internet Protocol-based system.

MUOS, which also supports the legacy ultra high frequency communications satellite system, will provide comparatively 16 times the capacity of the legacy system and eventually replace it. The MUOS-1, MUOS-2 and MUOS-3 satellites launched respectively in 2012, 2013 and January 2015. All four required MUOS ground stations are complete. MUOS-5, an on-orbit Wideband Code Division Multiple Access (WCDMA) spare with additional legacy system capability, is expected to launch in 2016. More than 55,000 currently fielded radio terminals can be upgraded to be MUOS-compatible, with many of them requiring just a software upgrade.

Lockheed Martin manufactured MUOS-4 at the prime contractor’s Sunnyvale, California facility. Earlier this summer, the satellite shipped to the Cape, where it was pre-launch processed and finally encapsulated at Astrotech Space Operations, a wholly-owned subsidiary of Lockheed Martin. The Navy's Program Executive Office for Space Systems and its Communications Satellite Program Office, San Diego, California, are responsible for the MUOS program.

“Delivery of this fourth satellite for the U.S. Navy completes the initial MUOS constellation and provides near-global coverage for the network,” said Iris Bombelyn, vice president of Narrowband Communications at Lockheed Martin. “For our mobile forces, that means for the first time they will be able to have secure, high-fidelity voice conversations, networked team calls and data exchange, including video, with anyone around the world connected with a MUOS terminal.”