Exciting news as NASA's Hubble sends back reports suggesting a stratosphere on a planet outside the solar system.

Scientists have discovered the strongest evidence to date for a stratosphere on a planet outside our solar system, or exoplanet. A stratosphere is a layer of atmosphere in which temperature increases with higher altitudes.

"This result is exciting because it shows that a common trait of most of the atmospheres in our solar system — a warm stratosphere — also can be found in exoplanet atmospheres," said Mark Marley, study co-author based at NASA's Ames Research Center in California's Silicon Valley. "We can now compare processes in exoplanet atmospheres with the same processes that happen under different sets of conditions in our own solar system."

Reporting in the journal Nature, scientists used data from NASA's Hubble Space Telescope to study WASP-121b, a type of exoplanet called a "hot Jupiter." Its mass is 1.2 times that of Jupiter, and its radius is about 1.9 times Jupiter's — making it puffier. But while Jupiter revolves around our sun once every 12 years, WASP-121b has an orbital period of just 1.3 days. This exoplanet is so close to its star that if it got any closer, the star's gravity would start ripping it apart. It also means that the top of the planet's atmosphere is heated to a blazing 4,600 degrees Fahrenheit (2,500 Celsius), hot enough to boil some metals. The WASP-121 system is estimated to be about 900 light years from Earth — a long way, but close by galactic standards. 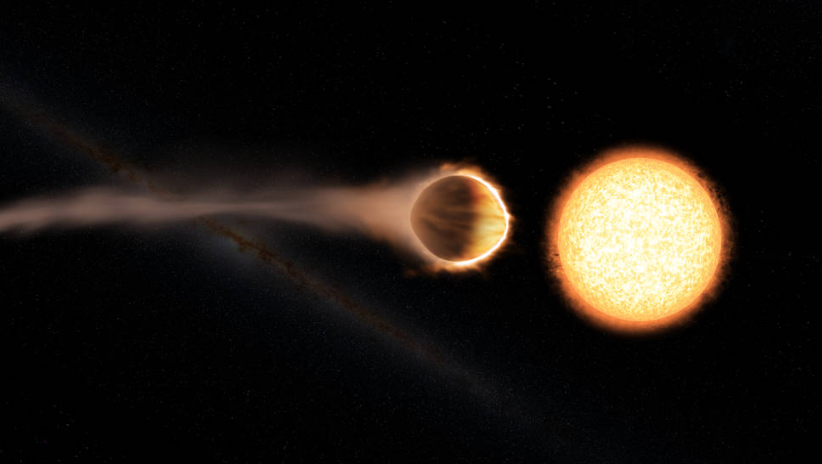 This artist's concept shows hot Jupiter WASP-121b, which presents the best evidence yet of a stratosphere on an exoplanet. Credits: Engine House VFX, At-Bristol Science Centre, University of Exeter

Previous research found possible signs of a stratosphere on the exoplanet WASP-33b as well as some other hot Jupiters. The new study presents the best evidence yet because of the signature of hot water molecules that researchers observed for the first time.

“Theoretical models have suggested stratospheres may define a distinct class of ultra-hot planets, with important implications for their atmospheric physics and chemistry,” said Tom Evans, lead author and research fellow at the University of Exeter, United Kingdom. “Our observations support this picture.”

To study the stratosphere of WASP-121b, scientists analyzed how different molecules in the atmosphere react to particular wavelengths of light, using Hubble's capabilities for spectroscopy.  Water vapor in the planet's atmosphere, for example, behaves in predictable ways in response to certain wavelengths of light, depending on the temperature of the water.

Starlight is able to penetrate deep into a planet's atmosphere, where it raises the temperature of the gas there. This gas then radiates its heat into space as infrared light. However, if there is cooler water vapor at the top of the atmosphere, the water molecules will prevent certain wavelengths of this light from escaping to space. But if the water molecules at the top of the atmosphere have a higher temperature, they will glow at the same wavelengths.

"The emission of light from water means the temperature is increasing with height," said Tiffany Kataria, study co-author based at NASA's Jet Propulsion Laboratory, Pasadena, California. "We're excited to explore at what longitudes this behavior persists with upcoming Hubble observations." 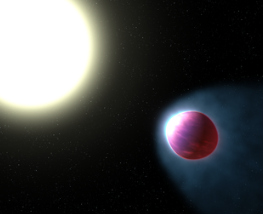 The top of the planet's atmosphere is heated to a blazing 4,600 degrees Fahrenheit (2,500 Celsius), hot enough to boil some metals. Credits: NASA, ESA, and G. Bacon (STSci)

The phenomenon is similar to what happens with fireworks, which get their colors from chemicals emitting light. When metallic substances are heated and vaporized, their electrons move into higher energy states. Depending on the material, these electrons will emit light at specific wavelengths as they lose energy: sodium produces orange-yellow and strontium produces red in this process, for example. The water molecules in the atmosphere of WASP-121b similarly give off radiation as they lose energy, but in the form of infrared light, which the human eye is unable to detect.

In Earth's stratosphere, ozone gas traps ultraviolet radiation from the sun, which raises the temperature of this layer of atmosphere. Other solar system bodies have stratospheres, too; methane is responsible for heating in the stratospheres of Jupiter and Saturn's moon Titan, for example.

In solar system planets, the change in temperature within a stratosphere is typically around 100 degrees Fahrenheit (about 56 degrees Celsius). On WASP-121b, the temperature in the stratosphere rises by 1,000 degrees (560 degrees Celsius). Scientists do not yet know what chemicals are causing the temperature increase in WASP-121b's atmosphere. Vanadium oxide and titanium oxide are candidates, as they are commonly seen in brown dwarfs, "failed stars" that have some commonalities with exoplanets. Such compounds are expected to be present only on the hottest of hot Jupiters, as high temperatures are needed to keep them in a gaseous state.

"This super-hot exoplanet is going to be a benchmark for our atmospheric models, and it will be a great observational target moving into the Webb era," said Hannah Wakeford, study co-author who worked on this research while at NASA's Goddard Space Flight Center, Greenbelt, Maryland.

The Hubble Space Telescope is a project of international cooperation between NASA and ESA (European Space Agency). NASA's Goddard Space Flight Center in Greenbelt, Maryland, manages the telescope. The Space Telescope Science Institute (STScI) in Baltimore, Maryland, conducts Hubble science operations. STScI is operated for NASA by the Association of Universities for Research in Astronomy, Inc., in Washington. Caltech manages JPL for NASA.

For more information about Hubble, visit:

For more information about exoplanets, visit: