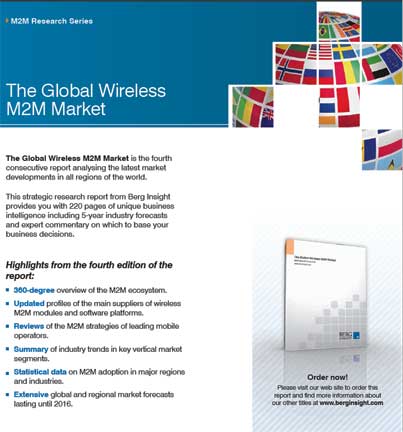 Brochure download link
[SatNews] According to new a research report from the analyst firm Berg Insight, the global number...

...of mobile network connections used for wireless machine-to-machine (M2M) communication increased by 37 percent in 2011 to reach 108.0 million. Asia-Pacific was the strongest regional market, recording a year-on-year growth rate of 64 percent and reached 34.5 million connections at the year-end. Europe and North America grew by around 27 percent each to 32.3 million and 29.3 million connections respectively. In the next five years, the global number of wireless M2M connections is forecasted to grow at a compound annual growth rate (CAGR) of 27.2 percent to reach 359.3 million in 2016.

“2011 was the year when M2M communication really took off in China. The number of wireless M2M subscribers in the country nearly doubled and is now estimated to exceed 20 million”, said Tobias Ryberg, Senior Analyst, Berg Insight. ”We believe that China Mobile became the world’s largest M2M connectivity provider at the end of 2011 with around 14 million subscribers. If the trend continues, the Chinese market will surpass the US in absolute terms within two to three years”.

Berg Insight expects that 2012 will be another positive year for the wireless M2M industry. A renewed interest in telematics technology from the global automotive industry has already had a positive effect on demand and promises to generate very significant additional volumes over the next years. Overall, the enterprise M2M market will benefit from increasingly advanced service enablement platforms that facilitate the integration of enterprise applications and networked remote devices. More information regarding The Global Wireless M2M Market brochure is available at this direct link.