Hubble "We Have a Problem" ... Now in Safe Mode as Gyro Issues are Diagnosed 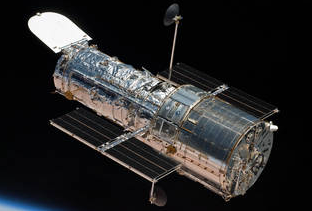 Redundancy is NASA's best friend, and so it is with the Hubble Space Telescope as NASA stands ready for failures with backups, and even in some cases, improved backup equipment. Despite that there were of course some 'excitable' headlines that read almost as though all is lost. Not so.

One newspaper quoted Rachel Osten, Hubble's deputy mission head at the Space Telescope Science Institute in Baltimore, said: "It’s true. Very stressful weekend. Right now HST is in safe mode while we figure out what to do.

"Another gyro failed. First step is try to bring back the last gyro, which had been off, and is being problematic. We’ll work through the issues and be back."

However, in the article issued by NASA this gyroscope has been exhibiting 'end-of-life' behavior for a year, and the failure was no surprise, as two other gyros have also failed.

The solution... NASA has three backup gyros that are more advanced technically and will hope to have longer lives.

The following is a statement from NASA that offers further insight...

NASA is working to resume science operations of the Hubble Space Telescope after the spacecraft entered safe mode on Friday, October 5, shortly after 6:00 p.m. EDT. Hubble’s instruments still are fully operational and are expected to produce excellent science for years to come.

Hubble entered safe mode after one of the three gyroscopes (gyros) actively being used to point and steady the telescope failed. Safe mode puts the telescope into a stable configuration until ground control can correct the issue and return the mission to normal operation.

Built with multiple redundancies, Hubble had six new gyros installed during Servicing Mission-4 in 2009. Hubble usually uses three gyros at a time for maximum efficiency, but can continue to make scientific observations with just one.

The gyro that failed had been exhibiting end-of-life behavior for approximately a year, and its failure was not unexpected; two other gyros of the same type had already failed. The remaining three gyros available for use are technically enhanced and therefore expected to have significantly longer operational lives. 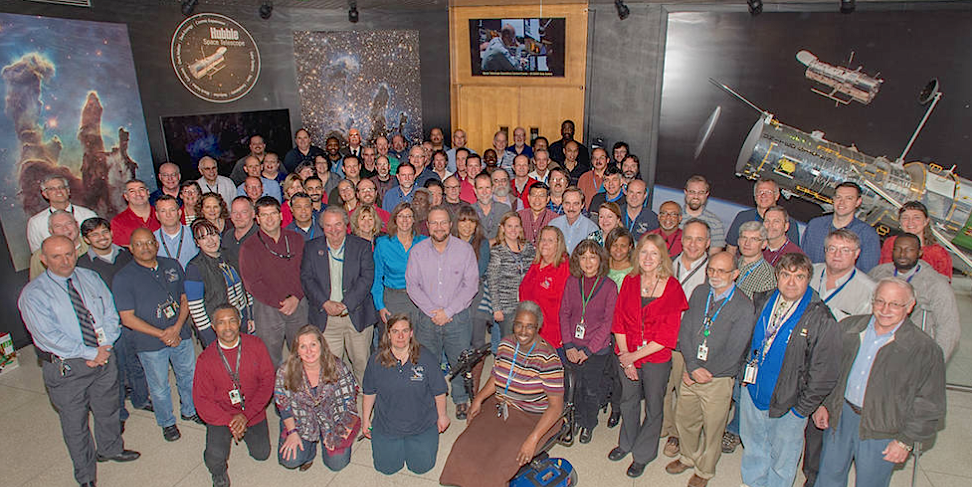 Pictured above is the Hubble mission operations team at NASA's Goddard Space Flight Center in Greenbelt, Maryland, as of Hubble’s 25th anniversary of flight. Since Hubble’s official start in 1977, thousands of people from the United States and Europe have supported the mission through building and testing hardware and software, operating the vehicle, and performing science operations. More than 30 astronauts have flown to Hubble to deploy, upgrade and repair the observatory with the support of a human spaceflight and space shuttle staff. Thousands of astronomers from dozens of countries have used Hubble and analyzed its data to produce more than 15,000 peer reviewed papers to date. Credits: NASA's Goddard Space Flight Center/Bill Hrybyk

Two of those enhanced gyros are currently running. Upon powering on the third enhanced gyro that had been held in reserve, analysis of spacecraft telemetry indicated that it was not performing at the level required for operations.

As a result, Hubble remains in safe mode. Staff at NASA’s Goddard Space Flight Center and the Space Telescope Science Institute are currently performing analyses and tests to determine what options are available  to recover the gyro to operational performance.

Science operations with Hubble have been suspended while NASA investigates the anomaly. An Anomaly Review Board, including experts from the Hubble team and industry familiar with the design and performance of this type of gyro, is being formed to investigate this issue and develop the recovery plan. If the outcome of this investigation results in recovery of the malfunctioning gyro, Hubble will resume science operations in its standard three-gyro configuration.

If the outcome indicates that the gyro is not usable, Hubble will resume science operations in an already defined “reduced-gyro” mode that uses only one gyro. While reduced-gyro mode offers less sky coverage at any particular time, there is relatively limited impact on the overall scientific capabilities.

For more information about Hubble, visit