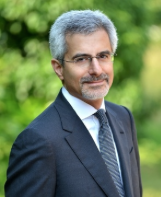 [SatNews] One of the main conclusions of a keynote delivered at the GSMA Mobile World Congress in Barcelona by Karim Michel Sabbagh, President and CEO of SES is that satellite has a key role to play in the architecture of future networks and the acceleration of digitization. “Satellite is a key actor for digitization and an integral part of the mobile ecosystem, adding reach and efficiency to mobile network operations,” Sabbagh said at the conference. “Only combining terrestrial and satellite infrastructures and technologies will lead to significant cost efficiencies, competitive solutions and compelling consumer advantages.”

Referring to the expected exponential increase in video traffic in all networks, further driven by the introduction of Ultra High Definition (HD) TV, Sabbagh said: “Mobile players are facing enormous challenges and the risk that the evolution of network demand and usage lead to an unmanageable congestion, if we do not call for a mainstream integration of cellular and satellite infrastructures. Only by joining forces, both industries can develop converging ecosystems and hence maximize public and private benefits.”

Sabbagh underlined the urgency of such an overarching, “hybrid collaboration”. “If for example today’s video content was to be consumed fully on demand and only by terrestrial fixed network in Europe, data consumption per household would multiply by a factor of not less than 35; with Ultra HD, this would again multiply by 3 or 4.” Every monolithic approach to technology would therefore risk falling short of the enormous challenges ahead, he warned. “If we fail, the overwhelming demand for video content and streaming will even deepen the digital gap further.”

Integrating digital infrastructures and combining the strengths of broadcast and broadband technologies, on the contrary, would create a unique combination, Sabbagh concluded. “Where terrestrial networks deliver connectivity, on the one side, and satellites deliver the mass market distribution of IP video and non-video content to homes, on the other, we can offload heavy video traffic from terrestrial networks. This will help all of us control costs, add reach and create truly converged ecosystems that will help us to drive the demand for further and future consumer applications and solutions.”