The space reporter, Andrea Leinfelder, at the Houston Chronicle posted a feature revealing that Rice University students are developing a research satellite to help alleviate the space junk orbiting the planet.

The OwlSat cubesat will collect data over the course of one year to see how extreme ultraviolet radiation, which is always emitted from the sun but becomes more intense during events such as solar flares, can alter a satellite’s path in Low Earth Orbit (LEO), the area where the International Space Station resides. Better understanding a satellite's orbit can help prevent collisions that can create space junk, said Ryan Udell, president of Rice University's chapter of Students for the Exploration and Development of Space.

"We don’t have a fool-proof way of mapping orbits,” Udell said. "There are very good predictors out there, but we can’t fully predict it.” 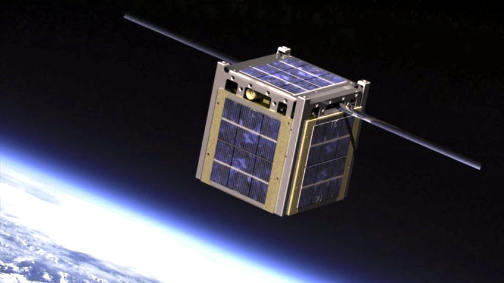 Artistic rendition of the OwlSat cubesat on-orbit.<>I>Image is courtesy of Rice University.

The OwlSat, measuring smaller than a tissue box, was one of 18 small research satellites recently selected by NASA to hitch a ride into space in 2021, 2022 and 2023. The OwlSat proposal was created by Students for the Exploration and Development of Space and is slated for liftoff in January of 2022. Students will start building the satellite this semester.

The research is important because small satellites are becoming increasingly popular. According to analytics and engineering firm Bryce Space and Technology, more than 1,700 smallsats (which can weigh up to 1,323 pounds) were launched between 2012 and 2019. This number is expected to grow as companies including SpaceX, Amazon and OneWeb plan to launch hundreds or thousands of desk-sized satellites to provide broadband internet to people who currently have little or no connectivity on Earth.

Udell, a 21-year-old mechanical engineering major, said the data collected by OwlSat could help predict how extreme ultraviolet radiation affects a satellite's orbit. Then satellites equipped with propulsion systems could be moved before colliding with another satellite. The OwlSat will also collect data to help predict harmful radiation levels to humans in LEO.